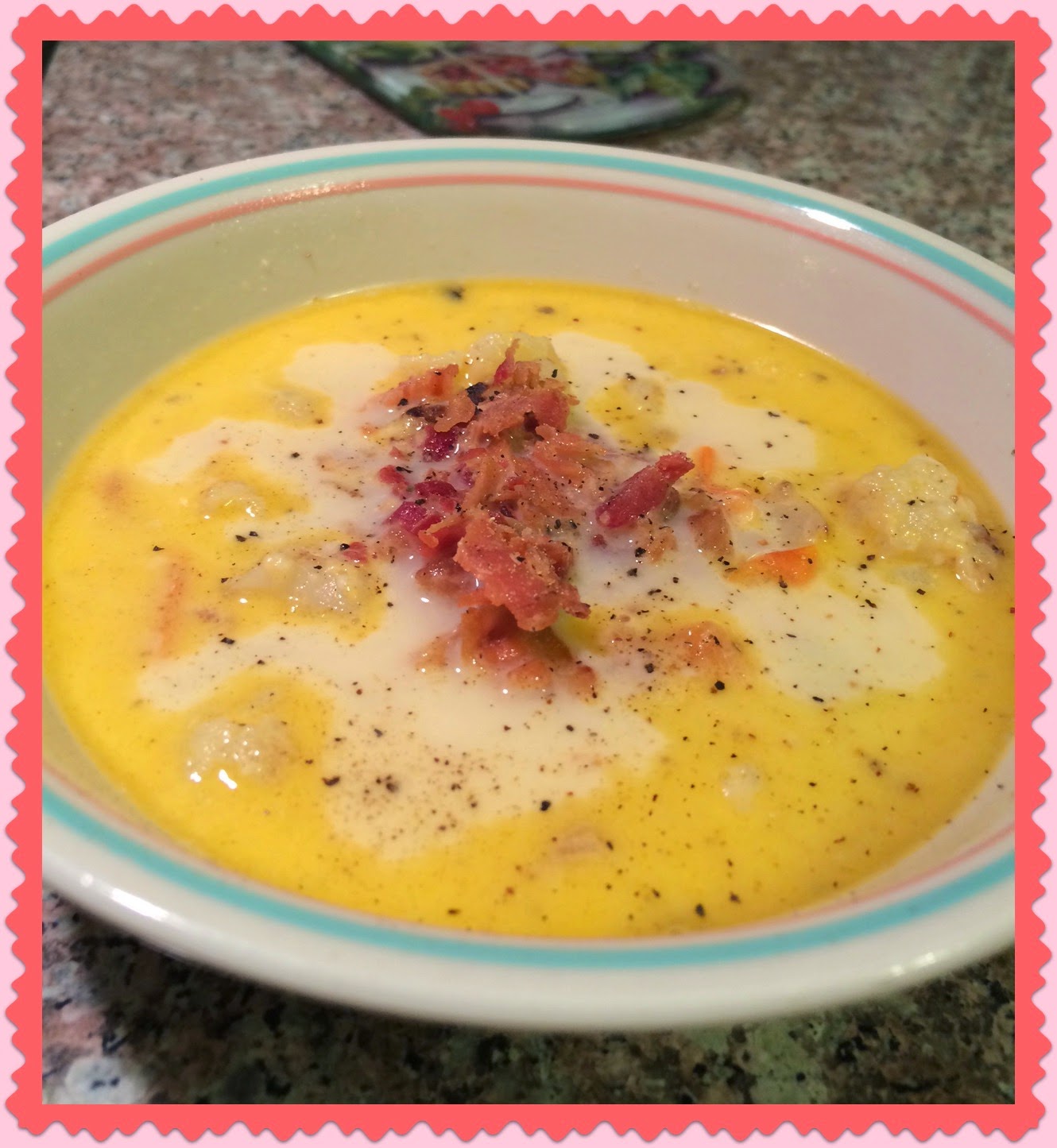 I'm so ready for Fall already! Ready for football and hot chocolate, for reading while wrapped in a blanket, for soups and sweaters and cold misty mornings!

Unfortunately, Fall is not accommodating me this year! So I'm having to continue with Fall like things even though it's in the 90's outside and I have to turn on the air conditioning just to give me Fall-like conditions!

Earlier today it was a bit chilly in my office. I was having lunch at my desk, a cold Asian Chicken Salad. It wasn't what I wanted, even though it was delicious; what I was really craving was my daddy's Caldo de Papa, Potato Soup!

He made the best Potato Soup ever! He used potatoes, of course; and tomato and jalapenos and lots and lots of cheese! It was warm and soothing and very, very spicy...that was the best part. He taught me how to make it several times, but in one ear...out the other. Fortunately my sister wrote it down for me.

I realized when I got home today, that I had all the ingredients. I had gone grocery shopping yesterday and my cupboards were fair to bursting with all sorts of goodies! So I dragged out my recipe book and started gathering supplies. 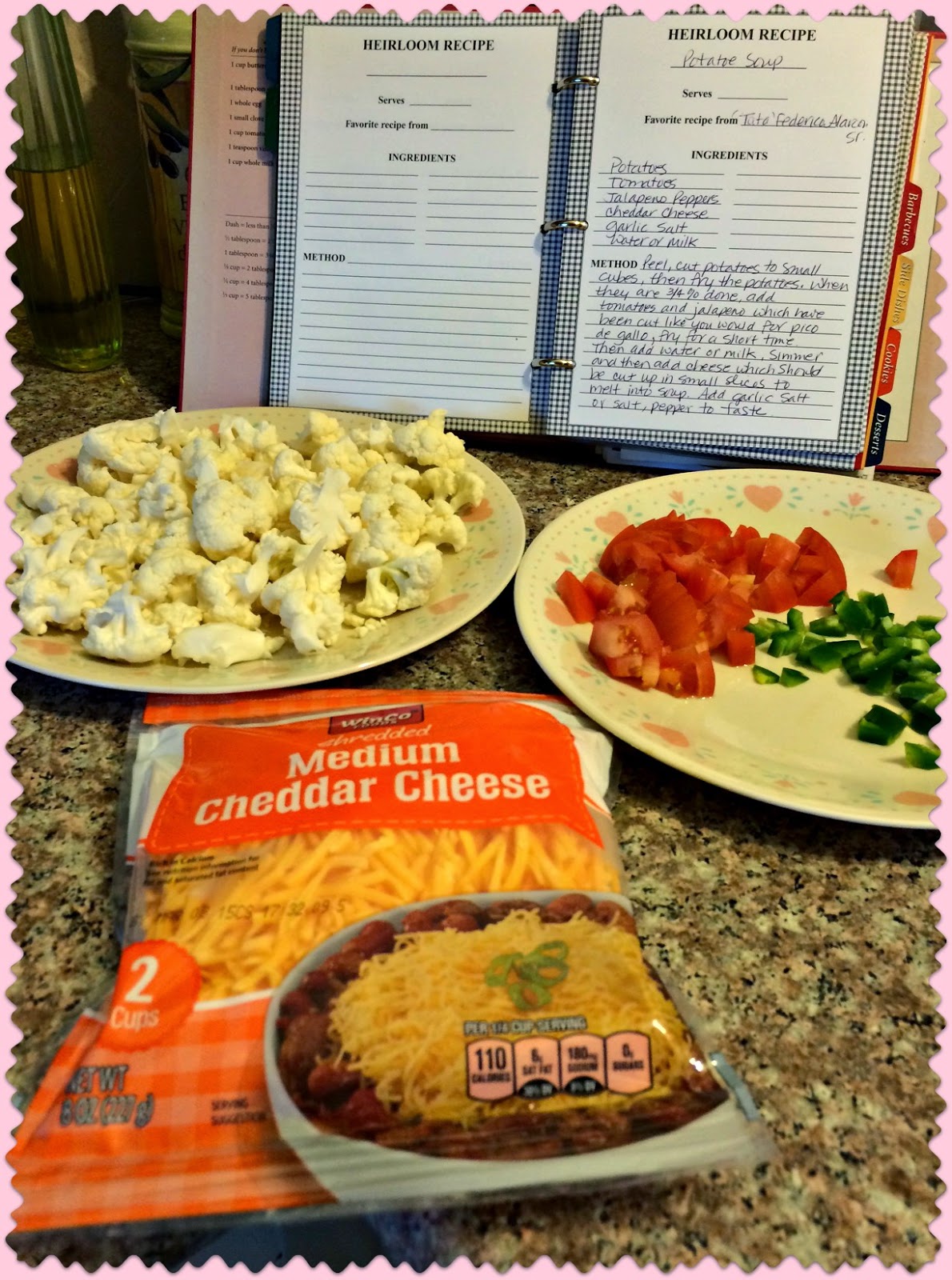 I took half a head of cauliflower and cut it up into florets. I diced up one Roma tomato and one Jalapeno, being careful to remove the seeds. I didn't have any fresh cheddar cheese to shred so I took out the handy pre-shredded bag of Cheddar that my son uses to make Quesadillas with and got to work!

With some Olive Oil in the pan I browned the cauliflower for about ten minutes judging the softness by crushing some of the bigger pieces with the spoon. When it was almost tender I added the diced tomatoes and jalapenos and cooked those all together for about five minutes or so. 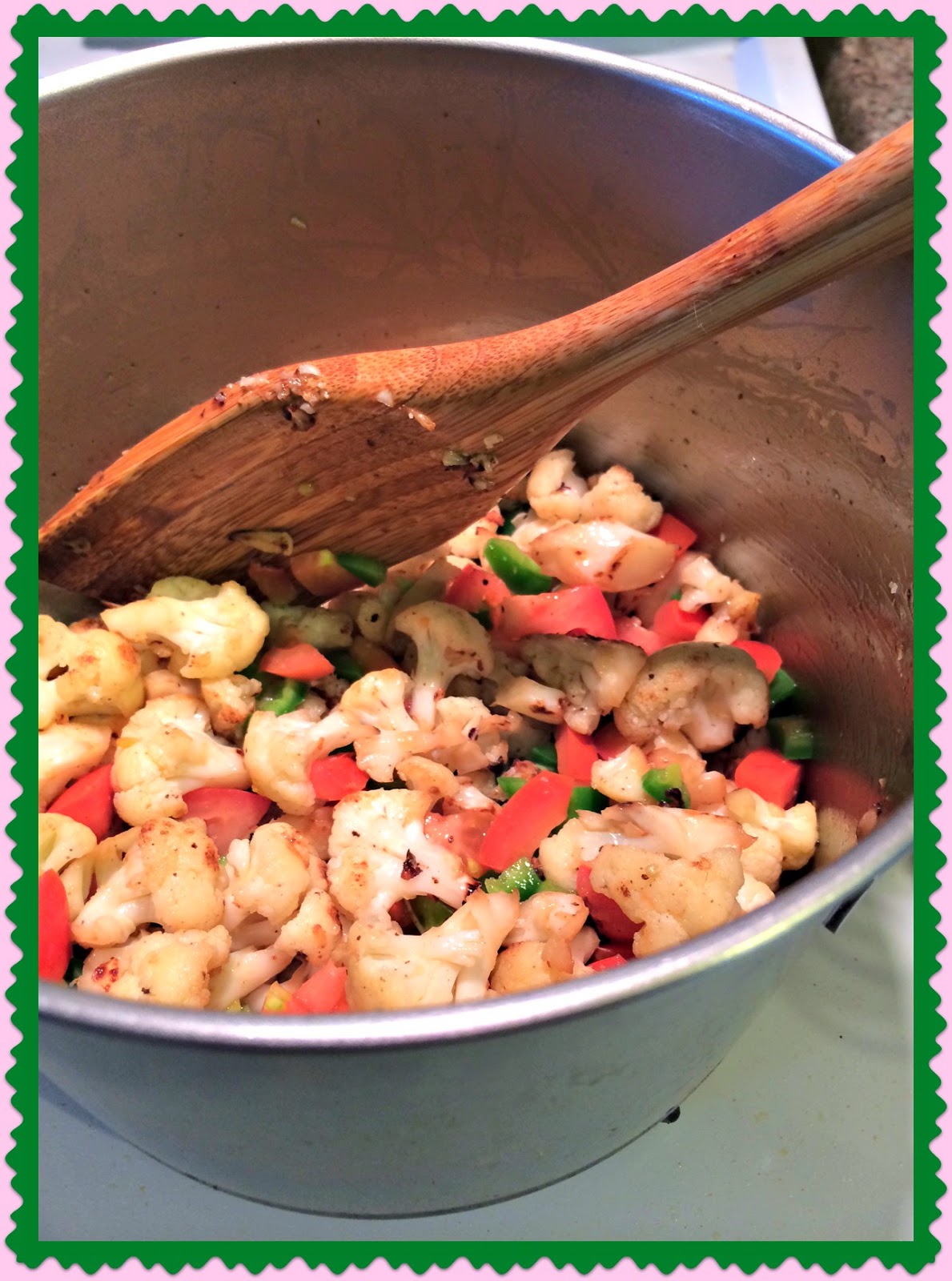 Then I added about two and a half cups of water. My dad used to add milk, but milk would ruin the low-carb aspect of this dish so I used water and then added just a splash of heavy whipping cream, about a 1/2 cup. You could also use half and half or if you have a super fast metabolism and you can eat anything you want then you can use regular milk and I will envy you forever! 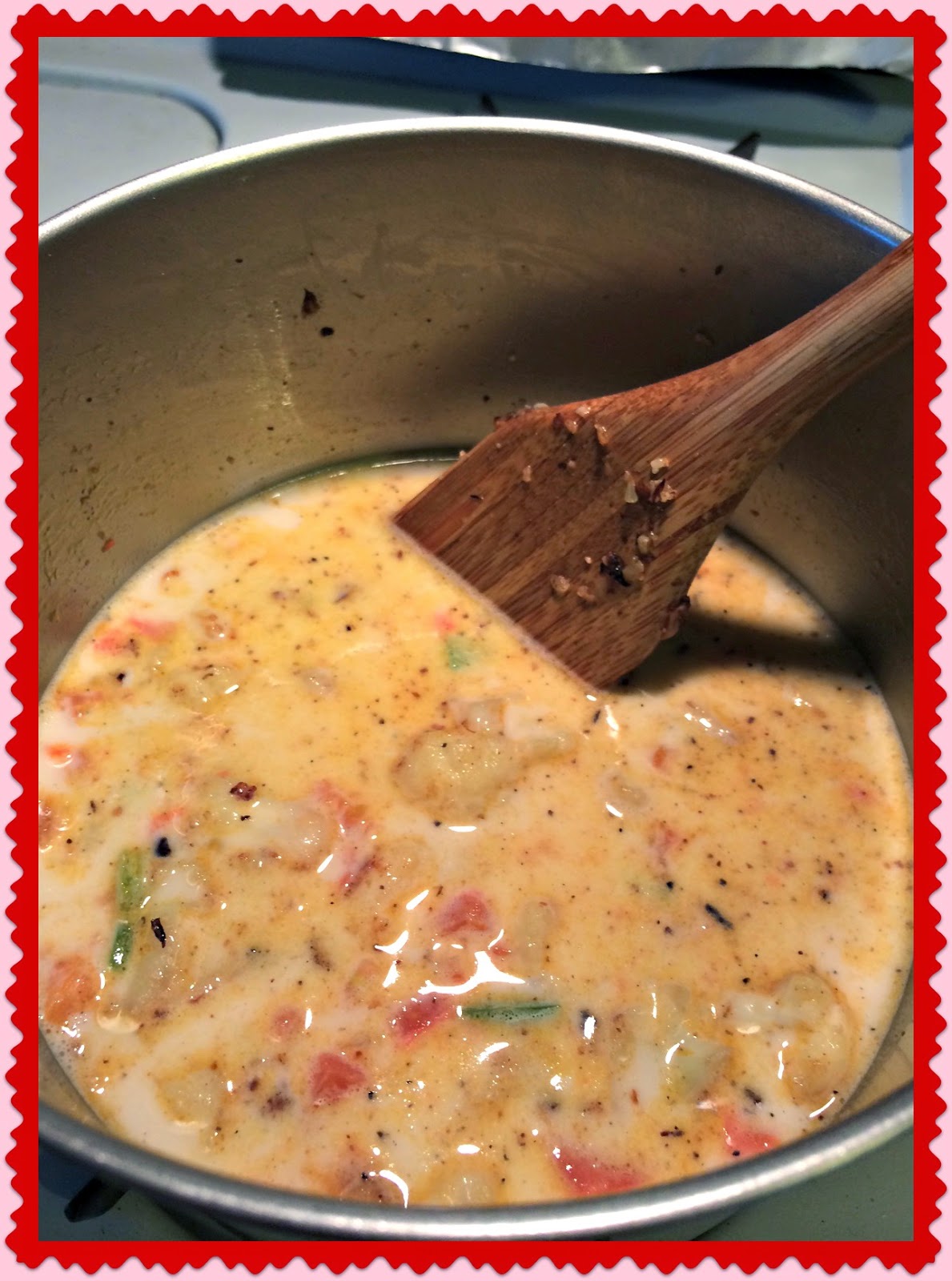 I let that simmer for a bit until it came to a boil then I added salt and pepper to taste. I had to add salt again later and I still think it could have used more but I'm a salt-fanatic, so don't go by me! While it simmered I did the dishes and put things away and found that I had some Monterey Jack Cheese so I cut that into small cubes and added it to the now boiling pot along with about a cup of the shredded Cheddar Cheese, just cause I'm crazy like that! 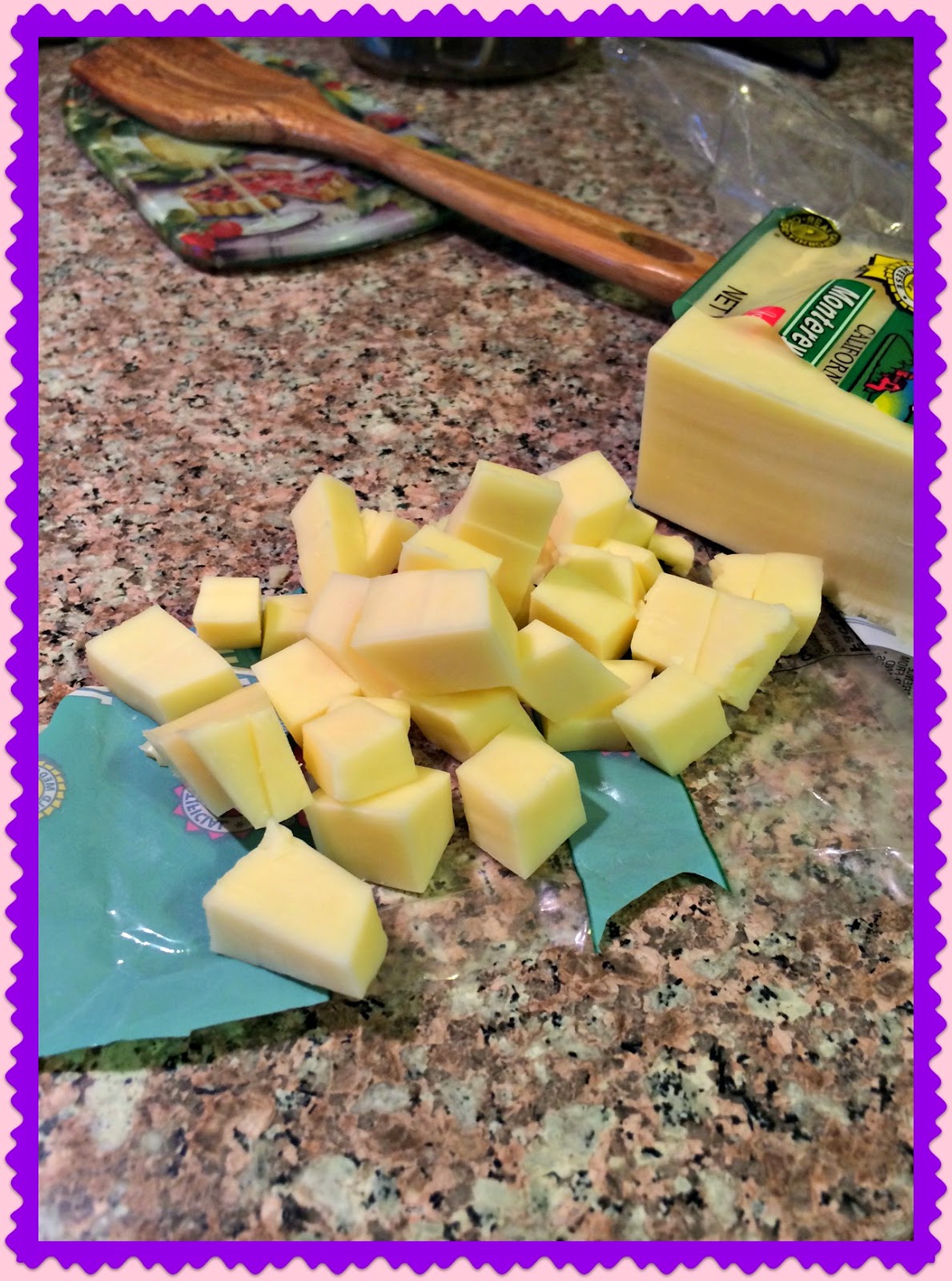 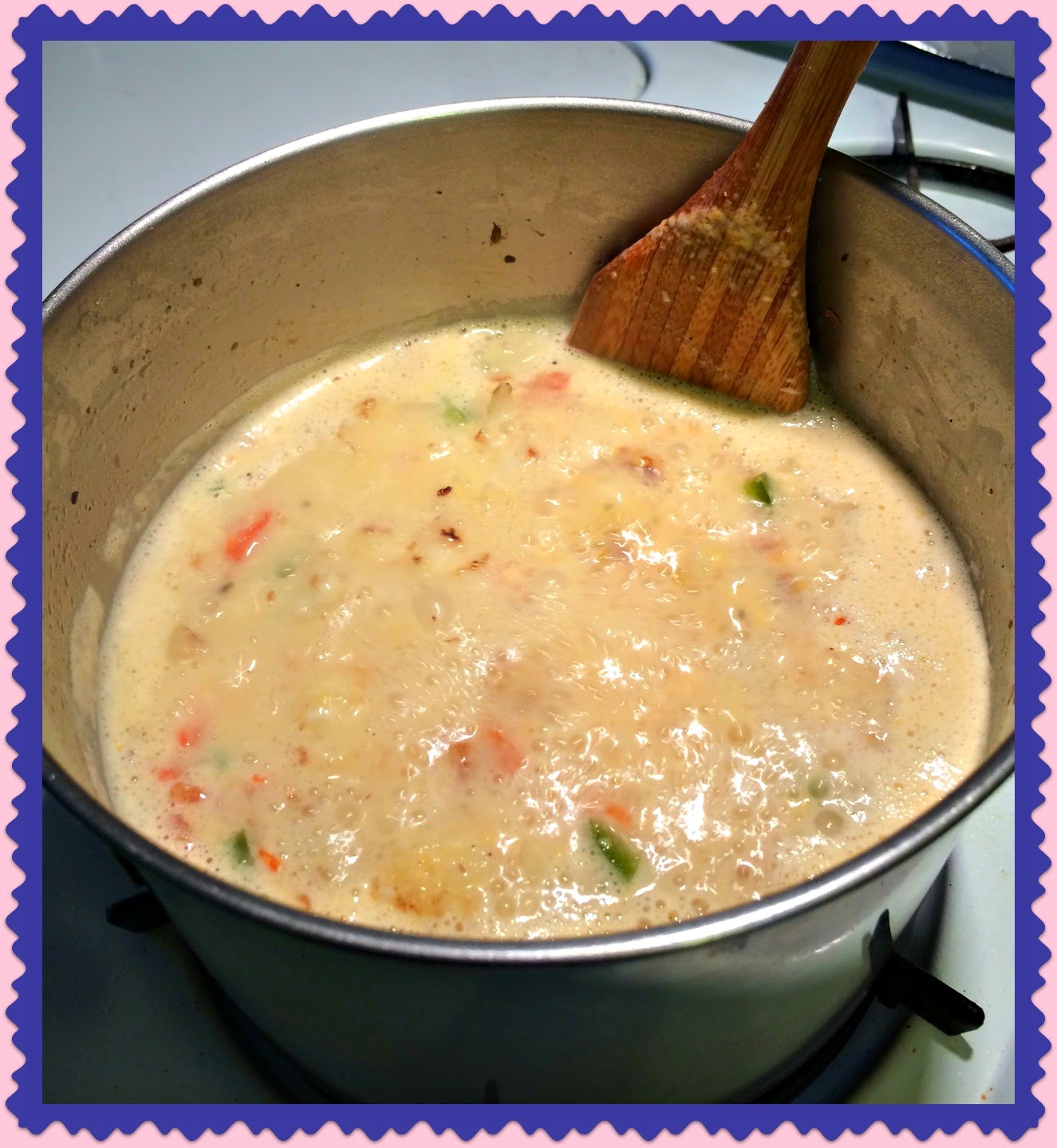 Now of course you need to wait for it to boil again and then check it for salt and pepper. (This is where I added more salt, don't be like me...watch your salt intake!)

Look how beautiful all those veggies look together! The cauliflower is crisp-tender and the jalapenos have given just a bit of heat to the broth. The cheese thickens the soup almost like a chowder and you don't have to use flour as a thickening agent. And the tomatoes? Well they just give it a pretty little pop of color! 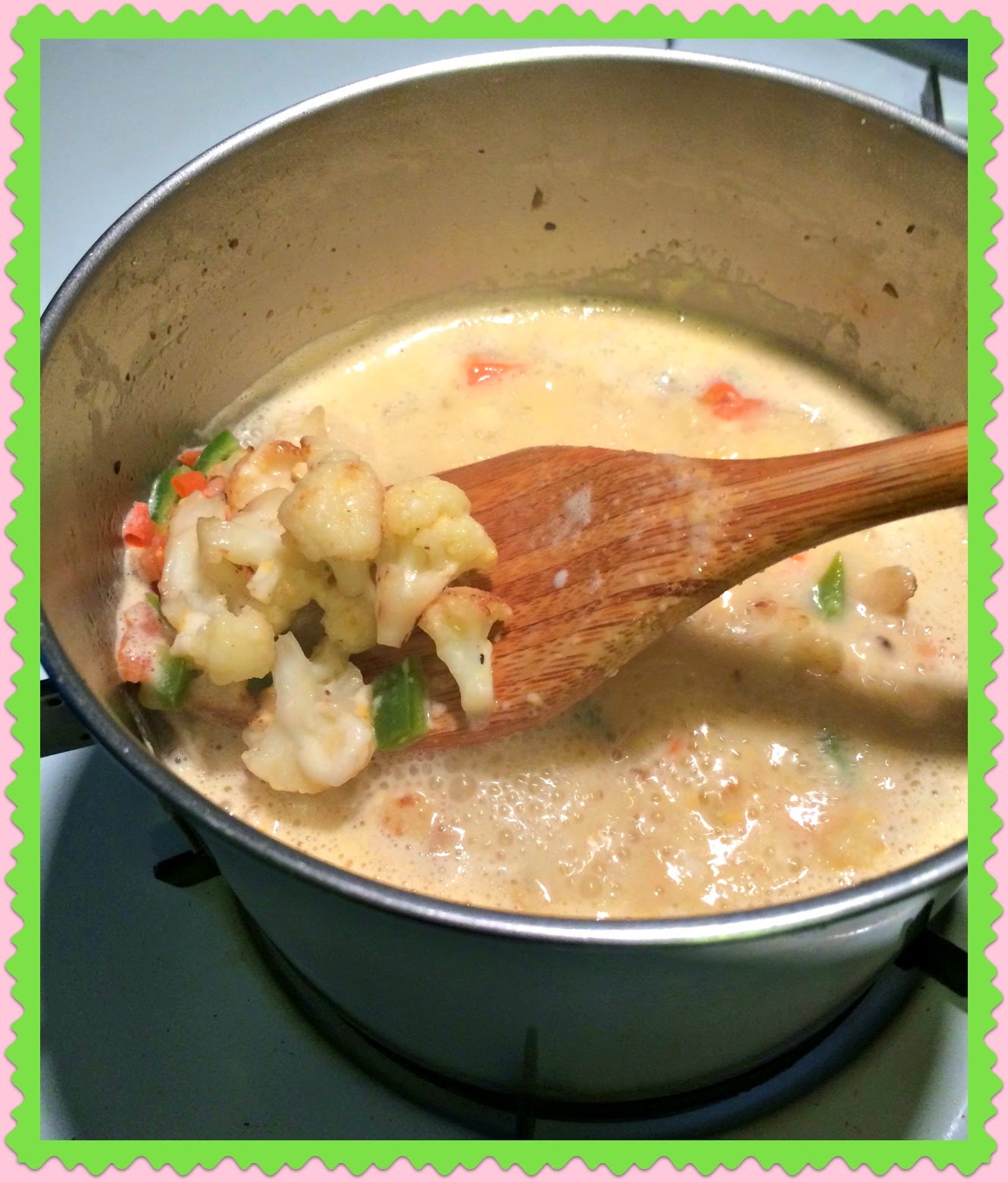 Then you serve it in a pretty bowl. I tossed in some bacon bits as a garnish and it did this weird thing when I did. I created a different color and made almost a flower in the middle. Do you see that or is it just me? Maybe I need to quit drinking wine while I cook?

Well regardless, it was very, very good. Not as good as the soup my dad made, but he would have been proud and would have smiled at me and said "Muy bien Chaparra" (Very good Shorty), and then he would have eaten a big bowl of it, probably adding several shots of Tabasco!