I've been trying to make a new soup every Sunday. Well I've done it one Sunday, when I made Kristen Hampton's World Famous Chicken Noodle Soup and then I skipped a Sunday because of home remodeling and the mess left behind and trying to organize and put everything away.

But my daughter made a request for Zuppa Toscana - Olive Garden Style. My cousin Stella sent me her recipe and I read all the ingredients and purchased them and didn't read the instructions on how to make it.

Yesterday, when it was time to make it, Sunday Night's Game of the Week was almost ready to start and I watch it on the TV in the kitchen while I cook, I read the instructions and realized that her soup was a crock pot soup that I should have made 6 hours ago!

So I checked YouTube real quick and found a recipe that is almost exactly like hers. Here is the video in case you want to watch it. It's by Judyfoody! This video is much shorter than Kristen's only 5.53 minutes long and she explains everything perfectly!

And, she even has a blog where she lists all the ingredients with written instructions. It's call Judy Foody.

Here's the photo of my soup! Looks just like Olive Garden's Soup! 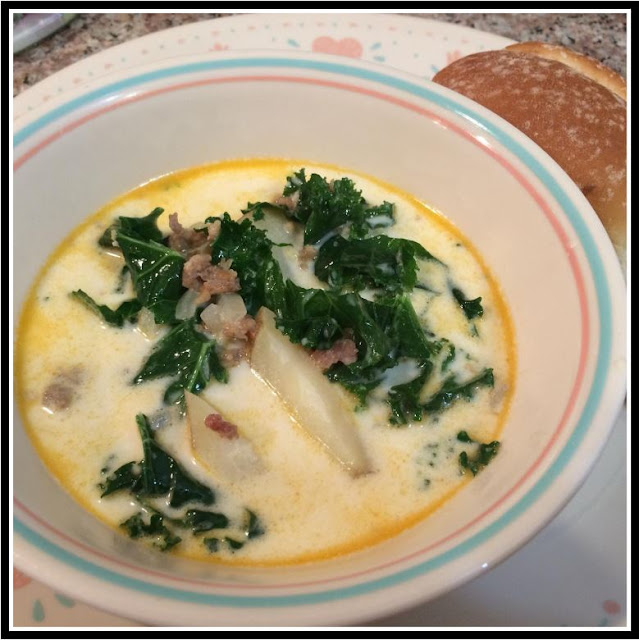 I'm going to list everything here in my blog because this is my way of keeping track of tried and true recipes that I love and want to eat again and again. This was delicious and exactly like the soup at Olive Garden!

6 Russet potatoes (she says 2 to 3, but my people demanded more potatoes next time!)

2 - 32 ounce boxes of low sodium chicken stock (she says chicken broth, but tomatoes/tomato, it's all the same to me and chicken stock is what I always use for soups)

1 bundle of Kale (next time use only half the bundle)

Optional Ingredient - Red Pepper Flakes. The spicy Italian sausage was not near as spicy as I would have like, so I may try this next time.

Prep Potatoes by scrubbing them very well, you can peel them but I like the skin on, my son did not. Slice potato in half then slice half moon slices, the thinner the quicker they will cook, but I think next time I will slice them a bit thicker as they got lost somewhat in the soup. Place potatoes in a bowl and fill with cold water to keep them from getting brown.

Prep Onions - this is pretty self-explanatory, we all know how to slice onion right? I did mine very fine so my people would not see it, hahaha!

Prep Garlic - I placed the garlic on a cutting board as she says and put a knife on top of the garlic, lay it flat then with your fist hit the knife and the skin pops right off. Then I used my garlic press to mince it as I don't like biting into pieces of it.

Prep Kale - Easy to do, just take the leafy part off the stems after you wash it thoroughly! As she says, Use one hand to hold the stem of the Kale and the other hand to strip the leaves off the stem, then I gave it a rough chop.

Prep Bacon - Took the 4 slices and chopped it into half inch pieces, it almost disappears into the soup and you don't really taste it, but I bet if you left it out you would miss it.

Place olive oil in a deep pot, I probably used 2 tablespoons, once heated add your Italian Sausage and break it into chunks and cook it thoroughly then remove it from the pot and set it aside, make sure you drain it with a spoon so you leave some fat in the pot.

Add your bacon to the pot since it's still hot and leave the fat from the sausage. Don't let your bacon get crispy, you just want it to start releasing bacon juice, then add your onion and garlic to the pot and cook until onion is translucent, then drain the water from the potatoes and place them in the pot and give it a stir, the aroma!!! Oh my goodness!

Add the broth until it covers all the ingredients and bring the soup up to a boil. Once it's boiling, turn the heat to low and simmer the soup for 20 to 45 minutes until the potatoes are soft and tender. I did 20 minutes but I had sliced them very thinly.

Once potatoes are perfect, add the sausage back tot he pot and again bring it to a boil. Turn the heat to low and allow the soup to simmer for a couple of minutes, then taste the soup for seasoning. At this point I added salt and pepper.

While the heat is low, add and mix the heavy cream to the soup, making sure not to scorch the cream.

At this point Judy Foody says to take the soup off the heat and add the kale, but I added it while on the heat and let it sit a minute while the kale wilted because I like hot soup and I felt that the kale probably cooled it off too much. I would add less kale next time.

And that was it, easy and delicious, the prep time was harder than the cooking time and we all loved it and it was gone in a minute!

Another keeper that I will be making again and again. 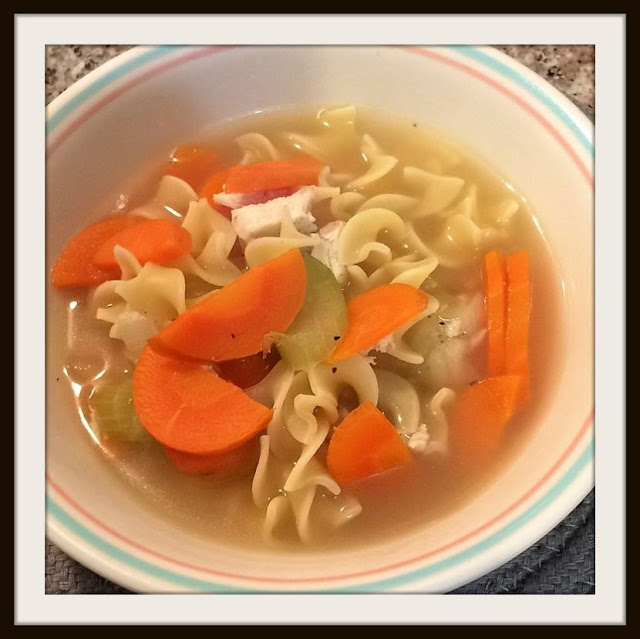 I know everyone in the world probably already has a chicken noodle soup recipe that they love, and most are probably pretty much the same, but believe it or not...I had NEVER in my life made Chicken Noodle soup!

I grew up eating Campbells canned chicken noodle soup and I loved it, it was good enough for me as I didn't get the craving for chicken noodle soup that often...but that was cause I had NEVER in my life had Kristen Hampton's World Famous Chicken Noodle Soup!

Who is Kristen Hampton? Kristen is a gift to this world! She's this quirky character who works for WBTV in Charlotte NC doing a segment called Good News and she goes out and about and looks for the good in the world, the good in people and she reports on those things. Her fame has exploded and she's a Facebook and YouTube sensation, just google Kristen Hampton and you will find lots of information about her.

Recently she did a live video run simultaneously on Facebook and YouTube in which she shows us how to make her World Famous Chicken Noodle Soup while she urged people to donate to Second Harvest Food Bank of Greater New Orleans to help the people that have been devastated by Hurricane Laura and Hurricane Delta, two hurricanes in the same vicinity just six weeks apart, they had not even cleaned up from the first hurricane when the second one hit. To date she has raised $9,418.00.

Here's the video, it's rather long but she's so entertaining that you don't even notice. And you can still donate to the cause.

So I just wanted to get down on my blog the ingredients on how to make this soup because it was as Kristen would say "Dadgum-delicious!" Kristen doesn't give you measurements, you just gotta wing it.

Garlic - I used two cloves minced in my garlic press, but I think three would have been ok.

Better Than Bouillon Roasted Chicken Base (to taste) - this stuff is amazing!!

Cooked Chicken - I baked 4 big boneless chicken breasts and only used two for the soup. Baked them with nothing but salt and pepper as seasoning.

I started out by seasoning the chicken breasts with salt and pepper and placing them inside a foil envelope, (two sheets of foil, one on top one on bottom and then you fold all four sides so the chicken is in a little foil envelope. Bake at 350 degrees for 1 hour, set aside to cool, don't open the envelope so the juices go back into the meat.

During the time the chicken is baking, you can be chopping your veggies. Once chicken is cooked, add olive oil to your  soup pot, then added the onions and cook them for about 3 to 5 minutes, just until they soften, then I added the celery and carrots which I cut pretty thinly added salt and pepper, but not a lot because the Better Than Bouillon has lots of salt in it. Now cook, stirring frequently for probably another 5 to 6 minutes.

Once the veggies are to your satisfaction, add the chicken broth, both boxes and then what I think was the secret ingredient, I add a big spoonful of Better than Bouillon! I don't know how long this product has been around but I just recently started hearing about it and I can't wait to try all the other flavors, check the other flavors out here. 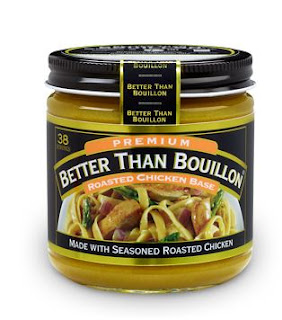 Then you wait for everything to come to a boil again and then taste it and see if you need to add more BTB, I know that next time I will probably add another box of chicken broth or water. Also at this time I added a sprinkle of dried thyme.

While waiting for the soup to come to a boil, chop your chicken, I've seen other people shred the chicken but I like smaller bite-size pieces best.

Once it comes to a boil, add egg noodles and sprinkle with dried thyme, I used wide egg noodles. I put in the whole package and like Kristen says "that's too many noods", it was too many noodles, next time half a bag instead. Let that boil for 5 minutes or so and then add your chicken, let it boil a bit and taste to see if you need more BTB, which I did and next time way more pepper.

And that it is it. Very good chicken noodle soup, easy to make and so hearty and comforting. Definitely going to be something I made again and again. If you have a great soup recipe, please share in comments or send me a link to the recipe.