The long ordeal is almost over and I’m so glad it is because I don’t think I could have taken one more day!

Let me backtrack and provide some history. On Nov 11th my sister Lisa and I drove our mother to Arizona to spend the Thanksgiving holiday with her Arizona family. She had a wonderful time but somewhere along the way she picked up what we think was a “flu bug”.

When Lisa and I went to go pick her up in Arizona on Nov 25th, poor mom was coughing and miserable and she continued to be miserable the whole way home. She went to the doctor and got some medication and inhalers and a Nebulizer, we thought this would be the end of it. Unfortunately by her birthday on Dec 19th she was still miserable but she put on a brave face for her children and grandchildren as we celebrated her 81st birthday.

On Dec 21 at about 11 pm she asked me to take her to the ER room. She was in pain and having a hard time breathing. I called Lisa and we took off with her and stayed there throughout the night until around 5 am when we both went home to get a few hours of sleep and a change of clothes. I was back at the hospital about 9 am and mom was still in the ER room as there were no rooms available.

Unfortunately there was a horrible Flu Bug going around and because of our bad air there were lots of elderly folks and kids with respiratory issues. It was a tough couple of days for mom, she hates hospitals and especially hospital food but on Dec 23rd at about 8 pm they finally released her and I was able to bring her home.
We had planned a Christmas Eve family get together, but we had already discussed it and decided to postpone it until the following weekend. So it was a sad Christmas Eve; where we had expected everyone to come over now it was just a quiet day. Mom did cheer up because she got to open the present I gave her and it was a Google Home system and we had fun setting it up and teaching her how to use it.

Life decided to throw another monkey wrench into our lives as on Dec 23rd when I got back home from the hospital with mom, my daughter took me into one of the bathrooms and showed me the walls that appeared to be bubbling…I knew right away there was a leak.

So here I have a sick mom, it’s Christmas holiday time and I have a leak somewhere! I tried to call my insurance and left a voice mail and called a plumber who said he would send someone on Dec 26th.The assistant plumber came in on the 26th as promised and went into the attic and said there appeared to be a small leak, the insulation was barely wet to the touch and said he could come back on Dec 30th to make the repairs.

Dec 30th the actual plumber came in, went in through the attic, said it appeared to be much more serious than his assistant had stated and because of the extent of the damage and the condition of the existing pipe he would have to make major repairs and there was no way they could make the repairs in the small crawlspace attic so they would have to tear down walls!!!

He told me he believed it would be covered by my homeowners policy but to call them and get approval to start.I still had not heard back from my agent, so I went to her office and of course it was closed so I called the 800# and just asked to speak to anyone, I set up the claim, this was on Dec 30th.

To make a long story a bit shorter I had to keep calling my insurance company and could never get in touch with the adjuster but kept speaking to whoever answered the phone so who told me to have the plumber start immediately by making sure there was no mold or asbestos issues.

Being An Example to One's Peers

I was shocked at how few miles she put on her car in one year, 668 miles! I probably put that many miles on my car in a month! Yep, I figured it out and I put 800 miles per month on my car!

As to the number of miles I put I my bike, well…that would be a bit fat zero since I don’t even own a bike! 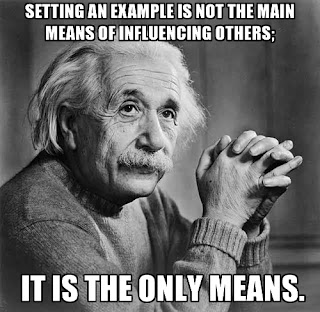 I find it admirable that she is doing something to reduce her carbon footprint, but as she says in her post, it’s not the tiny amount of carbon emissions that she saves, but it’s to serve as an example to one’s peers. Bravo Eco Cat Lady!

I make myself feel better by telling myself that I do bring my own lunch to work almost every day, thereby reducing the amount of miles I would be driving if I went out into the world every day to hunt and gather my burger and fries right?

I’m hoping one day to not have to commute as much, commuting is rough! Not just because of the traffic and wear and tear on my car, but I figure with traffic it takes me a half hour to get to work and a half hour to get home, meaning I lose an hour of each day just sitting and driving. 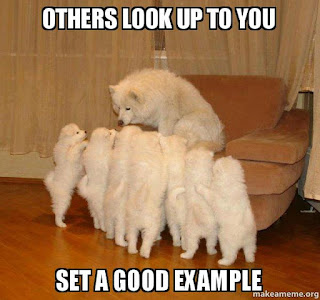 The worst part is that on the drive home I unwind and relax by listening to the radio and by the time I get home I’ve lost any motivation I might have had to get home and clean or cook or paint. I bet that if I lived a mile away from my job and I walked to work, I would have tons of energy, after all…a body in motion stays in motion.

But I also bet that if I lived a mile away from my job I would probably drive and not walk, it’s not easy to be an example to one’s peers.

Email ThisBlogThis!Share to TwitterShare to FacebookShare to Pinterest
Labels: Example

Here's a view from my office window. You would think "So? What's the big deal, looks like a normal view for an office." 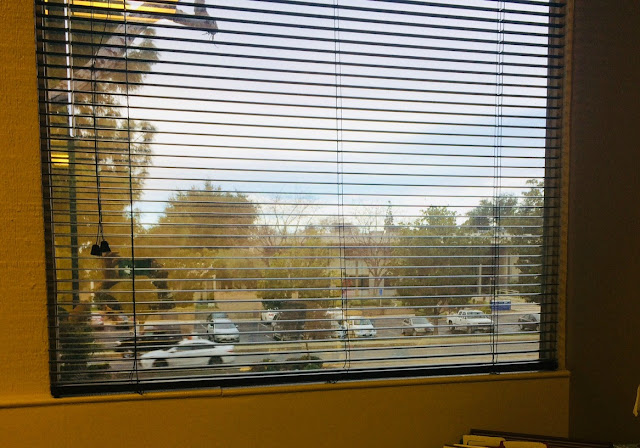 What you don't know is that I have not seen a blue sky for several weeks now. What I'm used to seeing is this!


Bad Air quality! I swear that is not an exaggeration, that is what our air has looked like for probably longer than 3 weeks! There were several days when I was driving home at 4:30 pm and it looked like 9 pm! This air quality causes all kinds of respiratory illnesses in people with sensitive lungs and even those without!

My sister Lisa and my coworker Angie all suffer horribly from allergies, sneezing and coughing and sinus headaches and just a general feeling of exhaustion.

My mom is currently back on oxygen after suffering pneumonia, there is just no way that she can even go outside with pollution like this!

But this morning we woke up to pouring rain. It caused chaos on the city streets and highways but now I can see blue skies. I am thrilled! 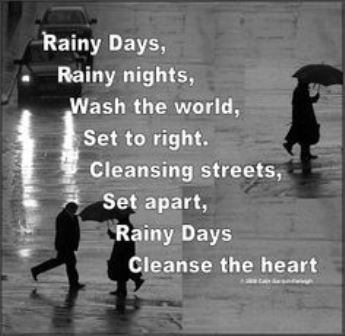 2017 was a tough year for me and for my whole family, but you can't move forward if you're too busy looking backwards right?

Knowing this I've decided to join in on a "Word of the Year" movement and for 2018 I've chosen the word "Patience". 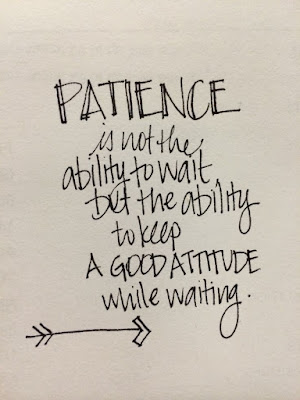 I found the quote above and it spoke to me. I'm not by nature a patient person, but really... who of us is? What I like about the quote is that it points out the fact that patience is not the wait, it's the attitude you keep while waiting.

In 2018 I'm going to try my hardest to keep a good attitude, no matter what life throws at me.

If you had to pick a word of the year, what would word would you pick and why?

Happy 2018 and I hope patience comes easily to you!

I've been keeping track of the books I've read ever since 2009 and somewhere along the way I joined Goodreads and they kept track for me, well...as long as I logged the books in they kept track. 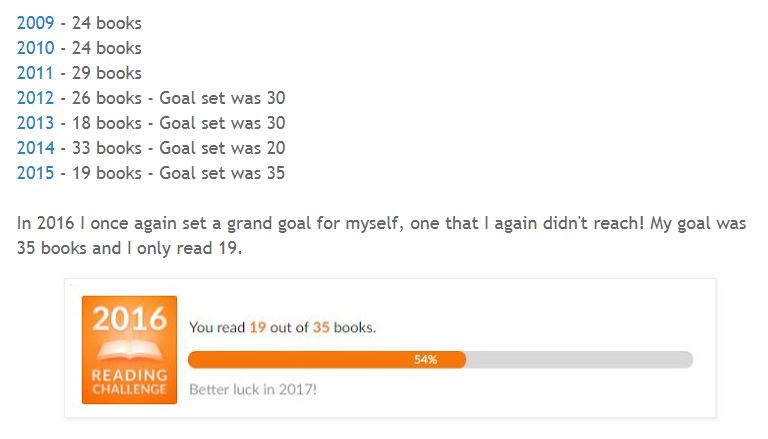 Makes me wonder why some years I read so little? For 2017 I set a doable goal of 12 books, figuring it shouldn't be that difficult to read a book a month. It wasn't, because I actually read 15 books! Yay me! This is the little banner that Goodreads prepared for me.

Here's a list of the 15 books. To tell you the truth, I don't remember too many of them. I did try to review some of them as I went along. I think probably the one I enjoyed the most was The Deepest Secret. 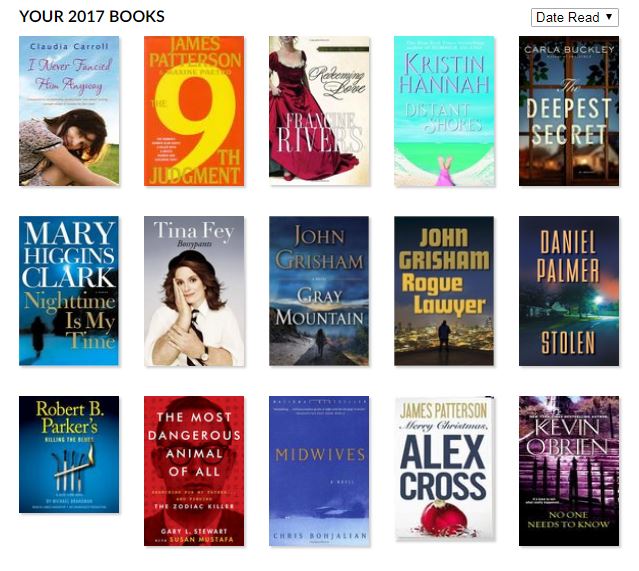 You can read my review of The Deepest Secret HERE. The other books was The Most Dangerous Animal of All which I read while I was at Jury Duty.

If you want to see a list of books by year you can just type in "Books Read" in the search bar to the right and all those posts will come up.

I've set a lofty goal of 25 books for this year. We'll see how I do. I was just telling my mom that I remember that I used to read in bed from half an hour to an hour every evening, but now I have a tablet and instead of reading I watch Art Tutorials every night instead. Maybe I'll do an Art Tutorial one night and read a book the next night.

What about you? Do you do any reading? What kind of books do you enjoy? What book or books can you recommend to tear me away from YouTube?

Posted by Alicia at 6:18 PM No comments: