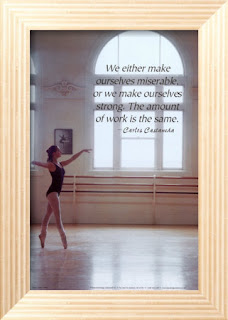 I have always loved quotes, especially in school when I had to write papers. Starting a paper with a quote was a "catcher" and sure to impress almost any teacher. Here are a few of my favorites:

I have another favorite, one that I want to someday paint over the door into my dining room, but my sister Lisa is guardian on that one and she always forgets to email it back to me.

Posted by Alicia at 9:00 PM No comments:

Email ThisBlogThis!Share to TwitterShare to FacebookShare to Pinterest
Labels: Quotes

Posted by Alicia at 6:39 PM No comments:

The Sisterhood of Women

Ancient Chinese Proverb say:
A hundred men may make an encampment, but it takes a woman to make a home.

What is it about women that makes them so special? Today I spent the day with my two favorite women, my sister Lisa and my mother Tome, and it was like spending the day at a spa, or meditating, I feel refreshed, happy, calm and blessed. And the strange thing is that I spent the day working like a dog.

We painted my sisters kitchen and we started early, by early I mean like around 9am for me, 7am for her.

We cleaned the walls, scrubbing them with de-greaser and soap that was hell on our hands. We taped up the kitchen cabinets and counters with newspaper and blue painters tape. We used primer on the walls and while this was drying we ran both our cars over to have the oil changed and the fuel injection system serviced. We also picked up some lunch not only for ourselves, but we picked up some pizza for her two boys.

We had a lovely lunch outside under her patio on her kitchen table. It was a breezy, cool day and perfect for spending time outside, but of course it didn't last and finally we went in to begin the real painting.

Side note: The night before we had gone to Walmart and my sis picked out the paint she wanted, she was going for a Tuscan Decor such as you see below: 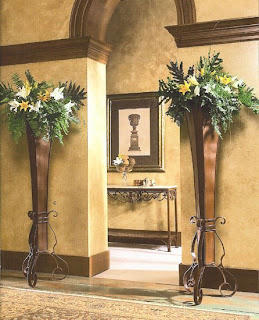 Pretty huh? She wasn't going to do the faux painting on it this one has but she did want that kind of golden yellow color. The color she asked them to mix I think was called Citrus, it was by Dutch Boy. It seemed kind of yellow to me, but she wanted something different and I thought, "Well why not, if that's what she wants" (we're a white walls type of family).

So back to the story, the paint was nothing like what you see above, it was baby "caca" yellow and it was hideous. The minute she slapped it on the walls she knew it wasn't what she wanted and she was going to be miserable if we continued.

She called Walmart, and wonderful Walmart said they would take the paint back even though it was custom mixed...I love Walmart!

Now we're primed and pumped and ready to paint, but we have NO PAINT!
So we went to our local TrueValue Hardware store in Shafter and the nicest man named Ron helped us. We found a little old hispanic man in the store wearing a strawhat and my sis knew that was the paint color she wanted. We told Ron and he held paint swatches up to the old man's hat and matched it! Was he great or what? And the old man was very nice to let us do that to him.

So now with paint in hand we returned to her kitchen and began. Right away she knew this was the perfect color...and it was, it was just what she wanted, warm and rich and soothing. And the weird thing is the name of the paint color on the paint swatch was, get this....StrawHat!!! She wanted it the color of the man's hat and the color was called Straw Hat!!

Anyway, we painted and joked and complained about our kids, our jobs, etc, etc. And then our mommy got there and she pitched right in and helped paint and we chatted with her and we laughed and had a great time, before we knew it, the kitchen was painted, the corners and bottoms were done. We tore down the newspaper and she and my mom put up curtains and hung pictures back and it was BEAUTIFUL. I wish I had had my camera, maybe tomorrow I'll take some pictures.

So as I said in the beginning of this story, women are so special and I'm so blessed to have my sister and my mother, there was nothing I would have rather done today then spend the day with them!
Posted by Alicia at 8:16 PM 2 comments:

Email ThisBlogThis!Share to TwitterShare to FacebookShare to Pinterest
Labels: Family, Labor of Love, Sisterhood of Women

This year I have two nieces and one nephew graduating from high school. I've received their announcements in the mail and it's caused me to look back at my own high school years, so many, many years ago. :-(

High School days were definitely the best days of my life and I look back at them with so many fond memories. I loved learning so classes weren't a problem for me, as long as I was learning something new and I was being challenged I was happy. I loved all the different clubs I belonged to and playing sports. I loved pep rallies, fund raising, pop bottle drives (I'm sure my nieces and nephews have no idea what those are), and I loved school dances on Friday nights after the football and basketball games! My mom has a saying that applies to my high school days, I didn't leave a "titere con bonete" (roughly translated I didn't leave a puppet with a cap on) (more about Mexican sayings I grew up with in another post). That's why I named this blog Titere con Bonete, because I hope that I'm still the same way and don't like to leave anything without having tried it at least once and being open to new things. I'm not saying I'm adventurous, because I'm not...but if faced with or given an opportunity for the most part I go for it and I hope to always live no titere with his bonete!

I hope that my nieces and nephews will be able to look back on their high school years with as much love and enjoyment as I do, because real life is waiting to kick them in the butt!

And I want to leave them with this quote by Thomas Alva Edison:
If we all did the things we are capable of doing we would literally astound ourselves
ASTOUND YOURSELVES !
To the ones I love in the
Class of 2008
Posted by Alicia at 7:00 PM No comments: