All week I've been hearing on the news about a video that  has people talking. Hearing that there have been over $58 million views on youtube. But because I'm busy living my busy life and running around like a chicken with my head cut off, I had not had time to view it.

Today my sister emailed me and she said, "Do you know who Kony is? Have you heard about him?" I told her that I didn't, that I had heard snippets on the news all week but I really didn't know who he was. My sister shared a video on facebook that I am about to share with you.

Not only did this video touch my heart, but it made me realize just how global our world has become. I'd never thought of it before. Never before have we all been so connected and so able to make a change just by being a part of the whole.

Please watch this video and I hope it touches your heart and your mind just as it did mine.

I'm signing the pledge. I want to make Kony as famous and as well-known as George Clooney and Angelina Jolie. I want my voice to be heard. But mostly I want Joseph Kony to be found and arrested and tried for his crimes against humanity.

Well...I'm still buried in paperwork at work. I think April is going to be a better month, which is good because if all goes according to plan I'm going to be really busy with a huge project in April. For now I'm just trying to keep my head above water.

Started this week by BBQ'ing on Sunday. Now that doesn't seem something important enough to blog about, but I've actually never BBQ'd by myself EVER! BBQ'ing is kind of a "man thing" in our family and my dad would BBQ every single Sunday for everyone and you always knew no matter what you would get an excellent meal on Sunday.

One thing that my dad always BBQ'd that was a real treat for us was corn on the cob.. in the husk. And I'm proud to say I'm following in my dad's footsteps by BBQ'ing some. Don't they look pretty? I also BBQ'd hamburgers and hotdogs which came out great. Next I'm going to try Chicken. My brother Fred BBQ's the best Chicken! 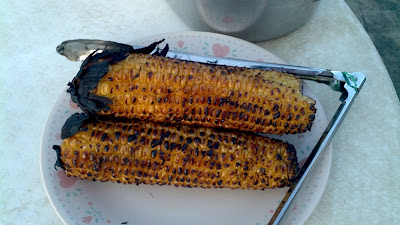 Also this weekend I went to J.C. Penneys. You know they changed their whole pricing plan? I was really scared that since they were going to be lowering their prices in order to be more competitive that the quality of their clothing was going to suffer...and I was right. I was not happy with anything that they had and even less with items that I tried on. But I did end up finding this beautiful black ring! I had been wanting one forever! I've worn it to work almost every day this week. It's hard to type with it, but doesn't it look good? Sorry for the blurry cell phone picture. 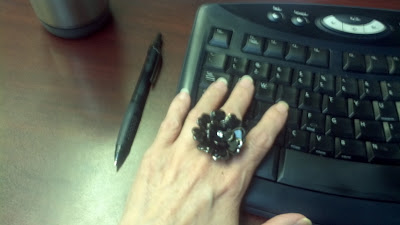 Oh yeah...and also this past weekend I hit the Big Lots 20% sale, and am I glad I did because I found the most beautiful patio table. I know you're probably thinking...well ummm, but it's in your kitchen. Yes...I know. But see, I gave my pretty little country kitchen table to my dad for his new apartment and we had been using my ugly round white plastic patio table and one chair in the kitchen. We only had one chair because the only one who ever sits at the table is my mom. Soon I'll be putting the table outside and I know it's going to be beautiful out on the patio! 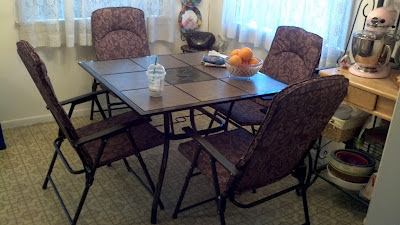 And did you know that this week the news sweeping the world is that brooms are standing on end...by themselves? This phenomenon or hoax, depending on how gullible you are is attributed to the spring equinox and the axial alignment as a result of the equinox. Well I heard about it this morning from my local weatherman, Kevin Charette who posted a picture of his broom at home standing straight up unassisted. So I had to try it and lo and behold!!! Voila! See... I did it! I actually left it standing up just like that and later checked with my son and he said it was still standing up! Cool Beans huh? 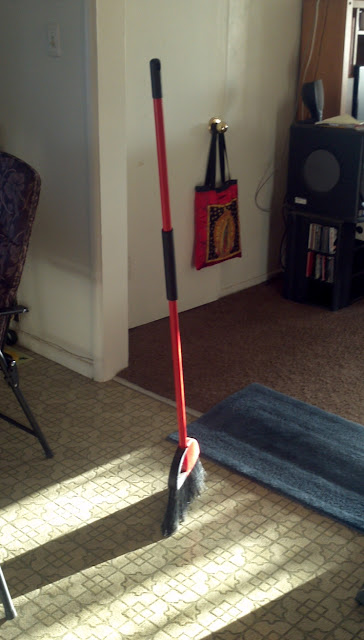 And this week I've gone back to my low-carb diet in an attempt to lose at least 10 pounds in a couple of weeks because I'm going to a conference with my sister later in the month. So I thought that since it was a little chilly outside, I would try a new recipe that I found on a new favorite blog my sister Lisa recommended called Blue Skies and Yellow Dogs. The creator and author of this super funny blog is "The Zadge" and she posted a recipe she calls White Chicken Chili. It seemed even simple enough for me as not only am I not a big BBQ'er I'm also not a big SOUP'er. The talent for whipping up a soup just eludes me, but this recipe from The Zadge was just the ticket as I was able to make it with a minimum of trouble and it was delicious. I didn't photograph it as well as The Zadge did because by the time I remember to photograph it I already had it in a plastic container for storage, but still it doesn't look too bad...and trust me it was delicious, although I wish I had noticed that she said 2 cans of white beans...I only put one in and it could have used more. 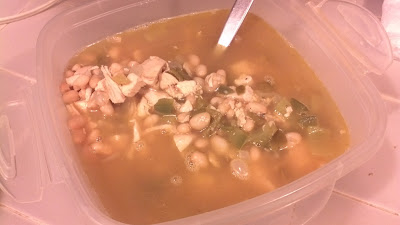 I topped my soup with way too much Monterey Jack Cheese, but trust me...it was delicious and fairly low-carb except for the beans, but since I was short a can that wasn't too bad. My son even liked it and he doesn't like many soups. He had two helpings and I managed to get a picture of his second bowl. He loaded it up with Garlic and Butter flavored Ritz Crackers. 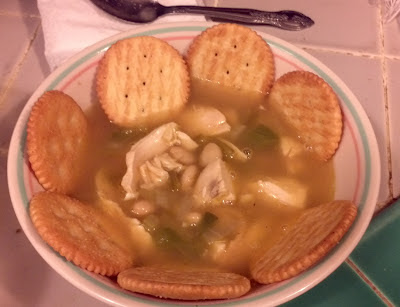 So that's a wrap up of my week. I'm so glad tomorrow is Friday. It's going to be a long, busy day, but at least it's Friday and I have the weekend to look forward to!
So how's your week been? Balance any brooms?﻿