Fun Facts about Bees and the Bee Whisperer 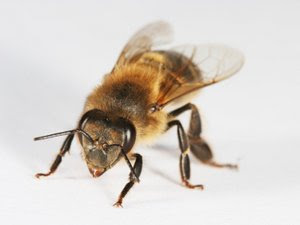 Did you know that the Bee is the official insect of the states of Arkansas, Georgia, Kansas, Louisiana, Maine, Mississippi, Missouri, Nebraska, New Jersey, North Carolina, Oklahoma, South Dakota, Utah and Wisconsin.

St. Ambrose is the patron saint of beekeepers. (That's not really a fact about bees though is it? But it's ok, because beekeepers will be a subject of my actual post here in a bit...keep reading)
It is rumored that Alexander the Great was buried in honey. Burying the dead (especially nobility) in or with honey was common practice in Egypt, Assyria, and other regions. Honey was also used to embalm the dead. (I found this fact particularly interesting given my history in funeral service)
Honey is believed to help the immune system and fight infection. It is often used as a "home remedy" to treat colds. Honey mixed with lemon can be a soothing cough syrup.
Bees possess five eyes.
Honey is nectar that bees have repeatedly regurgitated and dehydrated.
The honeybee is not born knowing how to make honey; the younger bees are taught by the more experienced ones.
Why the sudden interest in bees you might ask? Simple...because I have a hive of bees in the tree in my backyard. Three hives actually. A few months ago when I would go out of my backdoor there would be a carpet of dead bees on the back steps. I was puzzled as to where, why and how they got there and how come they were dead. Today's visitor to my home explained all that.

My visitor today is a beekeeper and one of the most attractive men I have ever met in my life. I could have listened to him speak about bees for the rest of my life :0)

But I digress, lets stick to the subject of why this young man was here in my backyard with his beautiful, piercing blue eyes and gorgeous black hair and jeans that he wore like. . . uh oh, wait a sec while I get a towel to wipe this drool off my keyboard. Be just a minute. . . . . . .

Ok, I'm back and I'm going to stick to the story and not get carried away again. Anyway, this beautiful man with the blue eyes to die for is a friend of my brother Fred. My brother asked him to come and see if he could take away the beehives for me so that I wouldn't be worried about them. (My sister Lisa is the one that prodded and bugged Fred to do this for me...thanks Lisa.)

So the beekeeper came and looked at my bee hive and told me they were awesome and how thrilling it was for him to see them. He explained to me how important bees are to the garden and how they won't hurt anyone and how the hive was too small for his purposes but he could get on a ladder and spray Black Flag on them, or I could just let them live and that they would die off on their own in about a month because he didn't see any eggs so there was no queen.

He also told me I could come out at night and take the water hose and spray the hives and the bees would drown because they breathe through their skin. (How does one so young and so gorgeous know so much?)

He also explained to me that bees can't fly in the dark and that's why they were dying at my back door. I have a motion sensor that comes on automatically and so it would do so and the bees would fly to the light then the light would go off and damn if those silly, little bees were then lost and would just die of cold and loneliness.

So that's my bee and beekeeper story. I've decided to keep the bees to remind me of the young man with the beautiful blue eyes who was so enraptured by the bees. And the bees were equally enraptured by this gorgeous bee whisperer...with the piercing blue eyes *sigh*
Posted by Alicia at 7:22 PM