Mawage, The Princess Bride, and Opinions 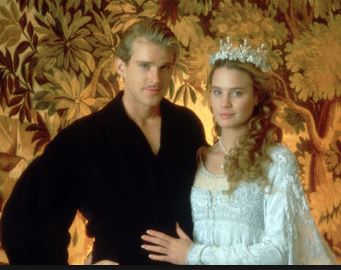 That is a line from what is probably my favorite movie ever! The Princess Bride.  The Clergyman is joining together in mawage (marriage) Princess Buttercup and Prince Humperdinck. I just want to scream at her “Don’t do it!” Actually I’m glad I don’t attend many weddings because I will always want to scream, “Don’t do it!” If you are planning a wedding the near future and you intend to invite me you may want to think again!

Just kidding. I will be screaming it in my head but my mama raised me right and I know better than to “act-up” in public. So you’re safe, go ahead and invite me! Just don’t give me Vodka…I can’t be held accountable when I drink Vodka! You’re fore-warned!

In explanation to the fact that it looks like I typed that quote while under the influence of Vodka, I really am sober, but the clergyman has some type of speech impediment that causes him to speak that way.

But my real reason for bringing up The Princess Bride is mawage, that bwessed awangment.

Marriage…ahhh marriage, what can I say about marriage except that it’s probably the hardest thing ever. Some might say raising kids is harder, but kids will be raised regardless and you love your kids pretty much unconditionally so there is hardly anything they can do or say that you don’t forgive. But getting along with a spouse and making a marriage work is much more difficult.

Usually in life when you bring two people together one of them has more authority than the other. In a job you have a boss or a supervisor and an employee. On a sports team you have a team captain or coach and the player. On a project or committee you have a project manager or committee chairperson. Granted there are exceptions but pretty much there is always one with more authority. Even in the parent/child relationship the parent is in authority, or at least should be.

In a marriage you’re supposed to be equal…but does it ever really turn out that way? Does it?

When I was married I can remember this coming up many times. A situation would come up where we each had an opinion and they didn’t always (hardly ever) match.  My spouses answer as to who the tiebreaker would be was always him. He said that if it came down to a situation where we could not agree then we would go by his decision. Cut and dry he’s the boss. Of course this was the same man who once told me my job was just a hobby and therefore I was not an equal breadwinner, so needless to say since I am in fact divorced, that I did not yield my opinion.

If I had I would probably still be married and maybe he would have mellowed out as he got older or maybe I would have killed him in his sleep…we will never know as I opted to get out of the marriage instead.

So tell me your thoughts, either about mawage or how you make your marriage work, how you’ve dealt with coming to a decision in which you don’t agree, how do you compromise. Or even outside of marriage, do you yield your opinion or stick to your guns?