Sciatica and the Escalator 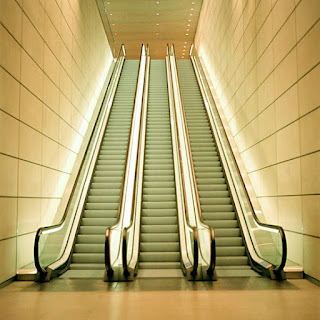 Once upon a time there was a beautiful Princess named Sciatica and she lived in a huge castle. The castle was so grand that the king had escalators installed to passenger the queen, the princess and honored guests up and down the various floors of the castle.
Princess Sciatica loved going up the escalators but she had an intense fear of the escalators leading down. She would see  the others getting on the down escalator with no problem, laughing and joking and hanging on to the moving hand rail, but when it was Princess Sciatica's turn to go down, she would stand at the edge and tell herself she could do it, but she would immediately feel a weakness in her legs and a sense of vertigo and she knew that if she tried to take one step on those moving stairs, her legs would not have the strength to hold her and she would fall and tumble all the way down to her death!
Luckily the King had also installed elevators in the castle and Princess Sciatica would ride the lonely elevator down to the lower floors. She could hear the laughter and joy of the others racing up and down on the escalators and she so longed to join them and swore to herself that one day she would!
One day, the Princess rode the escalator to the third floor which is where her bedroom was. She needed to fetch her fencing gloves and then she quickly raced to the other end of the castle to where the King, good King Otis had installed the elevators. She pushed the down button and waited. After a few minutes, she pushed the button again and waited. Then she did what any intelligent person knows to do, push the button over and over again! That always makes the elevator come faster cause it knows your are pretty darned ticked off by now!
Yet the elevator didn't come and the Princess did not know what to do. She roamed the third floor where she found her sister Princess Lisa and her mother, the good Queen Tomasa. She was crying and telling them that she wanted to go back downstairs but the elevator would not come. The sister and the queen knew of Princess Sciatica's intense fear of the down going escalator, but they tried to convince her how easy it was and that they would go before her so she wouldn't have to fear falling. They would catch her! But fear struck the poor Princess's heart and no amount of cajoling or pleading would help. Was our poor Princess destined to live forever in the highest floor of the castle? 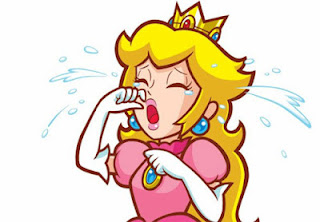 Apparently...yes! I know this cause it happened to me yesterday. I am Princess Sciatica!
Yesterday I went to Macy's Department Store with my mom and my sister. My mom had a gift card and wanted to use it to purchase a set of sheets for her new bed. The bedding department is on the third floor of Macys. My mom, sister and I rode the escalator up to the second floor, then the third. I had no fear going up and no worries about how I would get back down as I knew they had an elevator. Easy Peasy!
We shopped for sheets and then searched for the elevator and headed over and did as Princess Sciatica did. I hit the button and waited....then I hit the button again and waited...then my sister Princess Lisa hit the button (in case the elevator just didn't like me) and again we waited. Then I tried the old faithful move and hit the button several times in succession...nothing! Fear struck my heart! What was I to do?
My mom and Lisa tried to convince me that it's easy to get on the escaltor going down. They would help me, they would go down before me and that way if I fell I would fall on them. Aren't they wonderful to sacrifice themselves like that for me? Especially my 78 year old mother! But I knew that I couldn't do it. I no longer had the leg strength. Not since the great Sciatica Debacle of 2010!
For some reason, ever since I had that awful bout of Sciatica in 2010; where I had to take almost a month off of work because I was in the most excruciating pain I have ever had (it was worse than childbirth. I had two kids, one natural and one c-section...trust me, it was worse than childbirth), I don't have the strength in my left leg that I used to. It's hard just to climb stairs using my left leg. So I have to climb them by putting the right leg on the step first and then bringing the left leg up, then the right again, then the left. It's quite embarassing!
So there we were on the third floor. I can't use the down escalator and my mom and sister can't just leave me cause I drove and I had the car keys! We asked a couple of the sales clerks if the elevator was working or not and they really didn't know. Then I saw an official looking lady in a navy pin-striped suit and I asked her. And bless her little pea-picking heart, she saved Princess Sciatica! She told us that they were doing some work on the elevator so they were not working, but that she could take us down using the service elevator. I think she saw my elderly mom and thought she would do a nice thing for the sweet, elderly, gray-hair woman.
So she takes us through some double doors by the elevator and we're in the back of the store. And she was so sweet and she pretended like she was giving us a tour and pointing out products and joking with us. She was wonderful. Then she pushed the service elevator button and the doors opened. She then opened up this cage thing and she stepped in and said, "C'mon in!" 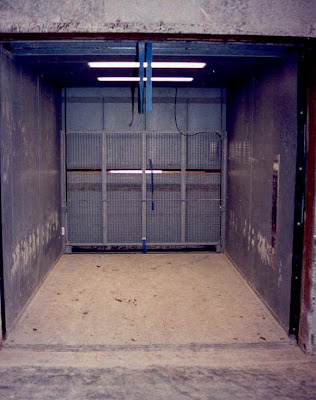 We were all a little apprehensive. It looked scary. My mom even asked her in a timid little voice, "You are going with us right?" Our little Guide assured us that she would never leave us alone, "Oh nowhoney...I wouldn't leave you alone, Oh Heavens No!" So we had no choice, we walked on in. Our little tour guide then proceded to close the elevator doors and then manually pull down the gate door. Now we were in the Belly of the Beast! The elevator started. It was slower than the public elevator so it took a little while for the elevator to get to the bottom. Our little guide just kept chattering to us about various "behind the scene" things at Macys. We were almost to the main floor when my mom felt she had to make one thing clear. She turned to our little guide and she said, "The reason we needed the elevator is because my daughter is scared to go down the escalator." And then she pointed at me! 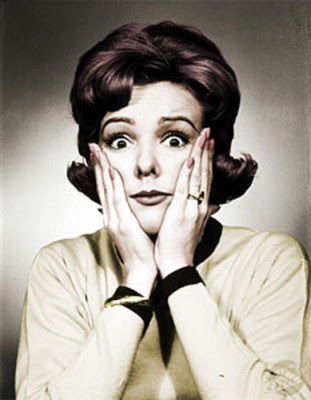 Can you believe that? My own mother threw me under the bus like that....lol. You have to admire her though, she didn't want to be thought of as some poor elderly lady that needed help getting around. Oh no! Not her, she's very proud of still being strong and independent! But dang-it...was my face red! Poor Princess Sciatica...