Pecans in the Cemetery

I know I've been A.W.O.L. as of late. No excuses...just life and a new venture of which I'll tell you guys about sometime soon. I'll be back to let you know what I did this past weekend and some other little random tidbits. But for now..........enjoy Pecans in the Cemetery! Ooooooooooooooo!!! 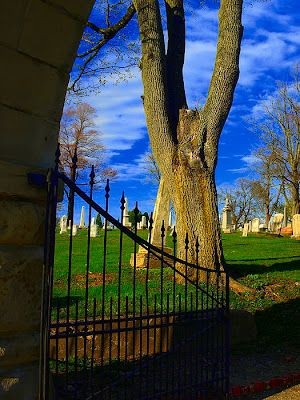 On the outskirts of a small town, there was a big, old, pecan tree just inside the cemetery fence.
One day, two boys filled up a bucketful of nuts and sat down by the tree, out of sight, and began dividing them. "One for you, one for me, one for you, one for me," said one boy. Several dropped and rolled down toward the fence.


Along came another boy riding along the road on his bicycle. As he passed, he thought he heard voices from inside the cemetery. He slowed down to investigate. Sure enough, he heard, "One for you, one for me, one for you, one for me..." He just knew what it was.
He jumped back on his bike and rode off. Just around the bend he met an old man with a cane, hobbling along. "Come here quick,' said the boy, 'you won't believe what I heard! Satan and The Lord are down at the cemetery dividing up the souls!" The man said, "Beat it kid, can't you see it's hard for me to walk."

Shaking with fear, they peered through the fence, yet were still unable to see anything. The old man and the boy gripped the wrought iron bars of the fence tighter and tighter as they tried to get a glimpse of the Lord.

They say the old man had the lead for a good half-mile before the kid on the bike passed him.

Email ThisBlogThis!Share to TwitterShare to FacebookShare to Pinterest
Labels: Funny