This post was originally posted in October of 2008. I think it's fitting today as it's Father's Day. I was answering a question posed in a book of reflections called Reflections from a Mother's Heart.

The question was...Where did your father go to work everyday and what did he do?
For as far back as I can remember my dad has been a farmer, farm hand, foreman, farm supervisor, tractor driver, mechanic, jack of all trades. My earliest memory of his work is when he worked in Eloy, Arizona for a man named Cecil or as he and my mom said it "Seeso". I don't know the name of the ranch but I know my dad grew cotton and hay. I know that he took me to work with him sometimes and Seeso used to call me Guera (meaning very light-skinned). I remember that Seeso was very short and very light skinned and very fat and I liked him, he was always nice to me and I liked that he called me Guera, he was also very Guero.
I know that my dad worked very hard and left very, very early every morning to go to work. We were always asleep when he left and when we were little...up until I started school he would make a special breakfast drink called a "Ponche" which consisted of milk, raw egg, sugar and cinnamon. He would mix it up real good (when I make it now, I put it in the blender, but I know we didn't have a blender way back then) and he would warm it up (without a microwave) and he would put it in a bottle for me and my little sister before he would go off to work. That way he would buy my mom a little extra sleeping time as we would drink our warm little Ponche bottle and not wake up hungry as soon as he left. Now I know that you're probably wondering about why we didn't die of ecoli, drinking raw egg, but I have a theory about it that I call simply "God loves little Mexican children".
I know that my dad left and did whatever he did at the ranch or the shop and then he would come home in the morning when my mom had us all "up and at'em" and she would fix him breakfast, this was usually around 6 or 7am. Then he would ride off in his truck again to return when it was lunchtime. He would have his lunch, grab a quick nap while we crawled around on his legs while he slept and then he was off again.
Sometimes, depending on how close he was working, we would see him off and on through the day until he came home, usually at about 6pm and he would have dinner and fall asleep. He worked hard and came home pretty tired.

I remember one time he came home and he ran in the house and yelled out at all of us to follow him outside. Attached to the grill of his truck he had a mountain lion or bobcat, not sure which, but it was tied to the grill. My dad chased the little guy in his truck (kinda like a cowboy would with a horse) and he lassoed it and tied it to the grill and brought it to us so we kids could see it. I remember the cat was pretty angry and hissed and growled. To me it sounded like a lion and I thought my dad was the bravest man in the world to chase and catch wild animals like that. Dad then drove it further out into the desert and released it.
One thing about my dad that I didn't know then, but I do know now is that he had a pretty bad temper and he was very sensitive about what people said about him, or how he perceived people thought about him, and I'm talking about people at work. His boss or a coworker could say something in all innocence and my dad would take offense to it and quit. He would go home and tell my mom, "Well I quit" and she would commence with the packing. Once I started school I would come home at least once a school year to see a U-Haul trailer parked in front of the house. I would hand my books to someone in my class and tell them with tears in my eyes that I wasn't coming back anymore and to please tell my teacher goodbye and give her my schoolbooks. And that would be that for my friends and education in that school.
Let me run down the list of schools I went to:
I started 1st grade (because at that time there was no kindergarten) at:
Eloy, Arizona, then
Toltec, Arizona, then
Harquahala, Arizona, then
Yuma, Arizona, then
Poston, Arizona, then
Calipatria, California and came to end up in
Shafter, California.

Now I could be wrong about that rundown, I seem to remember there might have been other schools, so I reserve the right to edit!
All I can say about my dad is that he lived and worked for us, his family. My mom tells a story of my dad stopping after work one day to buy himself his usual can of beer and I had just been born and he realized right then that by buying himself beer he was taking away from me. He realized that with the money he was spending for beer my mom could buy me a dress or something else I needed and he quit buying his daily beer.
My dad is still alive, and he's not in the best of health both physical and mentally. Especially mentally. I don't know if it's early stages of Alzheimer's or Dementia or just Paranoia or Schizophrenia, I really don't know so how can I label it. But I know the brain my dad is living with right now is not the brain of the man that lived his life for me. I have to remind myself of that a lot because I do get angry with him because he does and says hurtful things, but I know that I am who I am today because of him. My children are Americans because of him. I survived being a single mother because of him. I have pride in myself because of him.
Yes, my dad went to work everyday and he did something at that place he called the ranch everyday...but his real work, his paycheck is us...his kids and grand kids. I once read this poem by Ralph Waldo Emerson and when I did I thought...someday, when my dad passes this is what I want in his memorial cards because this is what my dad was... 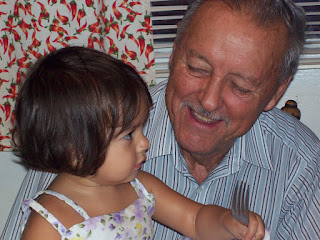 To laugh often and much, to win the respect of intelligent people and the affection of children, to earn the appreciation of honest critics and endure the betrayal of false friends, to appreciate beauty, to find the best in others, to leave the world a bit better, whether by a healthy child, a garden patch… to know even one life has breathed easier because you have lived. This is to have succeeded!”
–- Ralph Waldo Emerson
You are and will always be a success dad, because I have breathed easier because you lived.