Most of you already know this sweet little girl. . . For those who don't know, this is Chorizo, my daughter April's precious little puppy (actually she's close to a year and half old, so I don't know if she's still a puppy but she'll always be a puppy to us!). This little doll is cherished more than any other animal I know. April makes sure she receives the best and healthiest food, the best of medical care, the best exercise and grooming a dog could ever wish for. She is loved beyond belief!

Chorizo, who is a female by the way, has brought April and I closer to each other and closer to the plight of animals everywhere. Because of this little girl and my daughter April, I've gotten more active in animal fund-raising. A few months ago in April, we participated in the first ever "Bark for Life" hosted by the American Cancer Society. You can read about and view pictures of that event HERE. The American Cancer Society's "Bark For Life" is a Relay for Life fundraising event that honors the care-giving qualities of canine companions.The event was a lot of fun and it was nice to be part of the "first ever" and we definitely plan to do it again next year!

Two weekends ago April and I participated in another fundraiser for animals. This one was a 2nd annual event. A 5k fun run/walk put on and benefiting an organization known as H.A.L.T. Helping Animals Live Tomorrow. Halt is a rescue program. They rescue homeless dogs and cats, provide medical attention to them and then attempt to place them in a good and loving home! This program relies on the help of sponsors and volunteers and fundraisers such as this 5k fun run/walk.

Now I'm not gonna lie and tell you I ran this thing, cause I didn't. I wasn't even sure I was going to be able to walk it! 5k is 3.107 miles. The Bark for Life walk was only one mile, that was easy peasy! 5k...that's a different story! But it was for little guys like this one. . . 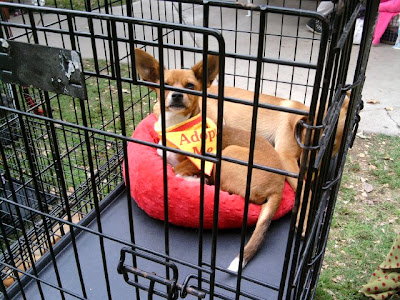 You can't help but want to do what you can to make sure that the little guy (or girl) in the picture above finds a home with someone that will love him and cherish him as much as we love and cherish Chorizo! And if getting my lazy butt out early on a Saturday morning and walking 3.107 miles is going to help, then I'm there and so is April and so for that matter was Chorizo............and all these people! 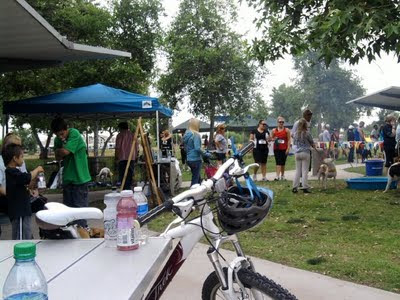 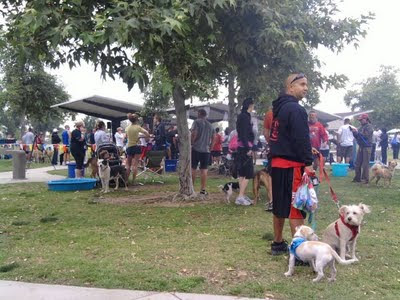 Bakersfield has a great bunch of people with BIG hearts! There were a lot of people there and it was a great event. I'm sure they raised quite a bit of money and I'm sure this event will just get bigger and bigger each year. You can go HERE to see tons of other pictures taken by a professional photographer Two K Photography who donated their time. Thanks Two K!

There were a lot of runners! You can't help but be around runners and not want to run! April, Chorizo and I walked all the way to the halfway point, but on the way back I told April I wanted to try running so I did. I grabbed Chorizo's leash and she was in doggy heaven being able to run with me. I didn't run far, probably not even 1/2 a block, but I did it about 4 or 5 times and it felt great! I've never been a runner, but I think the running bug has bitten me. Can you believe a little more than a year ago I was bedridden with Sciatica and now I'm running! I told April that next year I'm going to run the whole thing! I don't think she believes me... but I'm going to try.

I didn't take my camera with me, but I did have my phone so pardon these pictures, they're not great, but at least you get to see some more of the little cuties that we were all trying to help. It's sad to see them in cages. But during the run/walk itself, volunteers either ran or walked them on leashes. I'm sure they were in doggy heaven too! 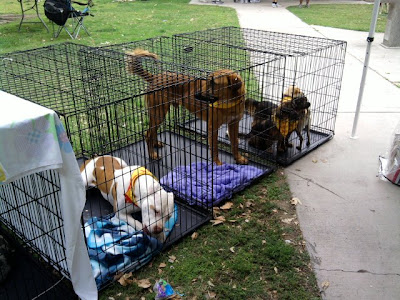 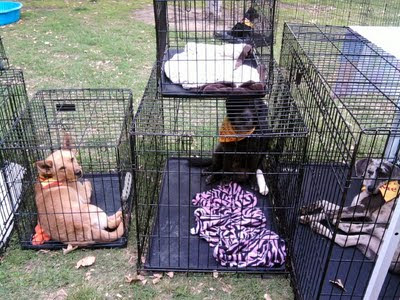 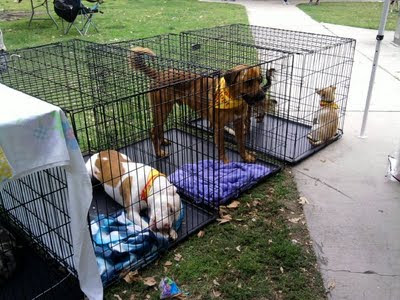 Since then I've been riding my stationery bike, I'm up to 7 miles now and as soon as I have a chance to go shopping for some running shoes I'm going to start training to run this event NEXT year!