FOOD...What is it good for? Absolutely Everything!

If feeding me and my brothers and sister as we were growing up had been left strictly to my mother then we would have eaten nothing but beans and tortillas morning, noon and night!! Ok, well maybe that’s a bit exaggerated, but seriously…if not for the fact that my dad was a meat and potatoes kind of man we would have starved!

See mom is a very picky eater, always has been, even as a child. Plus she doesn’t like to cook. She CAN cook…she can make some awesome dishes! She is a wonderful cook! Her chile colorado is to die for, as are her chili beans. But she dislikes cooking with a passion, probably because she dislikes eating. . .

Did your mouth just drop open in shock? How can anyone dislike eating? Well trust me she does. She eats because she has too. Food is not a big deal to her and she finds it frustrating to think of what to cook. And when she does cook she’s so sick of the smell of the food while it was cooking that she can barely manage to eat a bite or two. And leftovers?? Forget about it! She’s not touching leftovers!

My dad on the other hand will eat your arm if you don’t move it out of his way quick enough. I can remember him coming home in the mornings and my mom would make him breakfast. She would make him three or four pancakes slathered with butter and then she would fry an egg and put it on top. Dad would then smother it with maple syrup and joyfully break open the yoke and watch all the yellowy center mix with the syrup and he would scarf it down.

Dad loves food so much and eats with such relish and abandon that small children have been known to stop in restaurants to watch him eat. The way he moves his mouth and the joy in his eyes I guess are like magic and little kids can’t help but stare at him while he eats. He’s kind of gotten used to it. We have pictures of almost all the grandchildren sitting on his lap and staring up mesmerized by their Tata as he eats.

So suffice it to say that my brothers, sister and I were not brought up to be open to many kinds of foods. We didn’t have any idea when we were kids and up to young adulthood what tuna was, or onions, or fish, or beets, cauliflower, lobster, crab, shrimp, or even salads. We knew beans, tortillas, potatoes and always some kind of beef, cooked some kind of way.  We knew that dad would buy a small tin of something called sardines but we never knew what they were because he had to go outside to eat them as mom couldn’t stomach their smell!

So I’m reading this book for my From Left to Write book club called The Headmasters Wager by Vincent Lam and the author goes into detail about a lot of the food that was served in the home of the headmaster who was of Chinese descent living in Vietnam. I tell you what!!! Mom would sooner have died than to have lived in that home.

The food talked about in this book! Wow! Man oh man! My mom would be overwhelmed and disgusted by most of it. But some of it sounds so intriguing to me. For instance:

I couldn't even find photos on the whole worldwideweb of most of these dishes. Here's a few that I did find.


And that was all for just one party held at Tet or Vietnamese New Year! What a way to start the New Year! I guess it's not that different than the way we always started the New Year as far as strange foods because I'm sure to many of you the idea of eating Menudo would be a bit disconcerting right?

Menudo is a traditional New Years Day breakfast food that is supposed to have medicinal purposes in that it is the cure for hangovers.

I like the description of what Menudo is that I found at the Urban Dictionary: Awesome Mexican soup made with tripe (beef stomach,) hominy, chile peppers, onions, cilantro, oregano, and a splash of lime. Some like menudo served with tortilla and "con pata"--which means with a pig's foot in there too. Menudo is traditionally eaten on Saturday mornings and has been known to cure the common hangover.

What's the strangest food you've ever had? Have you ever tried any of the foods pictured above? 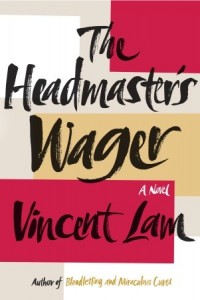 Headmaster Percivial Chen is a proud Chinese born man who runs English language school during the cusp of the Vietnam War. In his refusal to accept his adopted country's turbulent times, his gamble becomes a life changer. Join From Left to Write on November 15 as we discuss the The Headmaster's Wager. As a member, I received a copy of the book for review purposes.