Why we love Mariachi Music in my Family

"...the first mariachis did not read their music, they felt it." Jeff Nevin


There is just something in Mariachi Music that sings to the souls of all those in my family...from the youngest to the oldest. Mariachi's and Pinata's are our childhood. We all have our favorite songs and the one in the video above is my favorite. At about 1:33 in the video you will see two of my cousins, Elpidia and Ofelia or Pete and Faye as they are affectionately known, singing along with the Mariachi. And in the very left corner you see my own beautiful sister giving out a yell Mariachi style! We had a blast at this party and I'll share more photos in another post. For now enjoy the video. The lyrics are below and I have tried, as best I can, to translate the song.


Lyrics to El Rey :
(El Rey means The King)
Yo se bien que estoy afuera
(I know well that I am outside)
Pero el dia que yo me muera
(But the day that I die)
Se que tendras que llorar.
(I know you will have to cry)
(Llorar y llorar, llorar y llorar)
(Cry and Cry, Cry and Cry)
Diras que no me quisistes
(You'll say you never loved me)
Pero vas a estar muy triste
(But you will be very sad)
Y asi te me vas a quedar.
(And that is the way you will stay)

Con dinero y sin dinero.
(With money or without money)
Yo hago siempre lo que quiero.
(I always do what I want)
Y mi palabra es la ley.
(And my word is the law)
No tengo trono ni reina.
(I don't have a throne nor a queen)
Ni nadie que me comprenda.
(Nor anyone that understands me)
Pero sigo siendo el rey.
(But I continue being The King)

Una piedra en el camino
(A stone in the road)
Me enseno que mi destino.
(Showed me my destiny)
Era rodar y rodar.
(Was to roll and roll)
(Rodar y rodar, rodar y rodar)
(Roll and Roll, Roll and Roll)
Tambien me dijo un arriero
(Also I've been told by a muledriver)
Que no hay que llegar primero
(That you don't need to arrive first)
Pero hay que saber llegar.
(But you need to know how to arrive)


The meaning is lost a little bit when you translate it into English, but it's your basic love song. Guy meets girls, he screws something up and she kicks him to the curb, so that's why he says he is outside, he's outside of her life, but he knows that she is going to regret it and someday when he dies she is going to cry and cry and cry!! She'll lie to all her friends and pretend like he wasn't "all that" and she never really loved him but she's never going to get over him...or so he says :-)
Then he get's all macho and tells her that it doesn't matter if he has money or not cause he always does things his way (which is probably what got him into trouble in the first place!) And then he says that his word is the law...hmmm, maybe that's what got him into trouble? For some reason whenever any Mariachi sings that one line the women all swoon and go nuts, seriously, go back up and listen to them scream...women! We just love the bad guys *sigh*. Anyway, he goes on basically saying he doesn't need anyone when he says he doesn't have a throne or a queen and he's so misunderstood... but it doesn't matter cause he will always continue being the King!
Then he sings about a rock or a stone or a pebble he saw while on the road and he realized his destiny was to be like a rolling stone and roll and roll. You know, like the song, "Papa was a rolling stone. Where ever he went that was his home; and when he died....all he left us was alone!" Or like a rolling stone gathers no moss? Anyway basically he's saying "That's how I roll woman!"
Then he said he was told by an "arriero" which is a mule driver, I guess some guy that he stopped to chat with and complain about how his woman "done did him wrong"...anyway, this mule driver tells him, "you don't need to be the first to arrive, it's better to know when to arrive" or "it's better to make an entrance". I guess when you seek advice from a mule driver you get what you pay for as it sounds good and makes the song flow in Spanish, but it really doesn't make much sense to me? Any suggestions?
So that's the song in a nutshell. Oh...and go back up and watch it again and watch for the lady Mariachi! Gotta love her! I always wanted to be a Mariachi but sadly I can't sing or play an instrument or perform in public or wear blouses that you have to tuck into your skirt! Other than that though I could probably be a pretty good Mariachi!
Thank you to the Baldenegro Family for hosting the celebration of their parents 50th Wedding Anniversary and giving us all a chance to get together for a happy occasion for once.
Que Viva los Baldenegros...Long Live the Baldenegros! 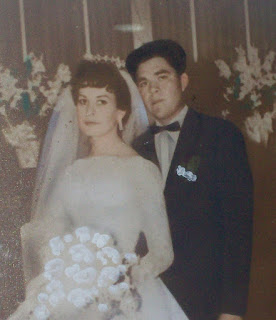