Last week on Thursday my sister Lisa and I headed to our state capitol for the annual conference for the California Association of Public Cemeteries. My sister is the District Secretary for our local cemetery and they held the conference in Sacramento. Normally she takes her husband to these conferences and meetings. But once a year she likes me to go with her to the one that hosts a costume party and dance. Last year we went to Seaside and the costume theme was the "70's", you can see those pictures HERE.

This year it was a little tougher to come up with costumes as the theme was "Famous People in History". The theme was fitting since the conference was being held in Sacramento, our state capitol, a city filled with so much history.

Lisa and I went through a lot of research trying to find a female person in history; keeping in mind also how easy/difficult it would be to create the costume. Lisa decided to go as Helen Kane. American actress and singer Helen Kane may best be remembered as the original "Boop-boop-a-doop" girl. A native of the Bronx, born Helen Schroeder, Kane got her start in vaudeville working with the Marx Brothers at age 17. In 1927, she made her Broadway debut in A Night in Spain, a musical. In 1928, Kane appeared in the musical Good Boy the show that produced her signature song "I Wanna Be Loved by You" with its boop-boop-a-doop tagline that Kane sang in a little girl's voice. She eventually became a contract player with Paramount and appeared in a few films. While at the studio, she became the inspiration for the animated cartoon character Betty Boop and launched a whole new series for animator Max Fleischer. Boop was first drawn by Grim Natwick who used Kane's face and physical features and combined them with those of a French poodle. In 1950, Kane was played by Debbie Reynolds in the feature biography of songwriters Kalmar and Ruby. When Reynolds sang "I Wanna Be Loved by You," Kane dubbed in her famous line. 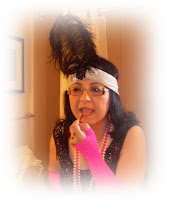 Helen Kane battled breast cancer for more than a decade. She had surgery in 1956 and eventually received two hundred radiation treatments as an outpatient at Memorial Hospital. She died on September 26, 1966 at age 62, in her apartment in Jackson Heights, New York. Her husband of 27 years was at her bedside. Her remains were buried in the Long Island National Cemetery. Lisa based her costume on the fact that Helen battled breast cancer and she wore pink (as you can see in the picture to the left) as part of her costume along with a breast cancer awareness pin.

We arrived on Thursday thinking that we were going to take a tour of the Capitol before the Meet and Greet that day. Unfortunately it was raining cats and dogs in Sacramento and as Lisa and I are made of sugar and would melt in all that rain we stayed in the hotel and had a drink and popcorn at the bar and whined about the rain!

That evening we went to the Meet and Greet where the vendors in cemetery products had set up booths and displays. After the event we met up with my sisters boss, Tim and four members of the cemetery board to head over for dinner at a very popular restaurant in Sacramento called Aioli Bodega Restaurant. They have a varied menu and specialize in Tapas and Short-ribs. (I had the chicken, what can I say, I'm not the bravest of diners.)

The next day dawned bright and beautiful and poor Lisa had to attend seminars and classes but I had the whole day to do whatever my little heart desired. So I went shopping. I had wanted to take the Capitol Tour but the day got away from me and I headed back to the hotel to help my sister get herself ready for the costume party. Here are some photos I took to capture the evening. Whenever they ask me if I'm going to dress up I tell them I can't as I'm the official photographer!

Getting ready in the hotel...makeup has to be perfect! 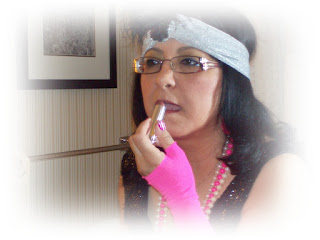 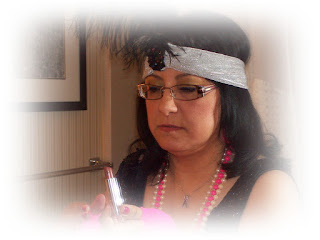 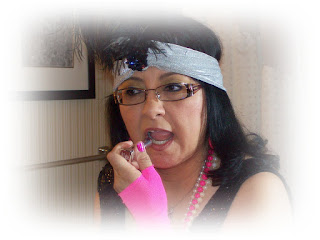 Then we had to take some pictures before we headed downstairs to join the other famous people. Here's Lisa sitting in the window, you can see the view. We were on the 7th floor. 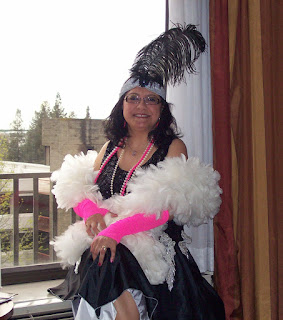 Lisa really loved the pink gloves that she was able to find to match the long string of pink pearls. She said she felt like a Flapper Princess! 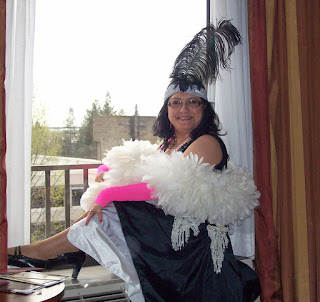 And here's one of the two sisters ready to head out. Everyone kept asking if we were twins the whole time we were there. We don't see the resemblance but I guess a lot of people do. What do you think? Could we be twins? 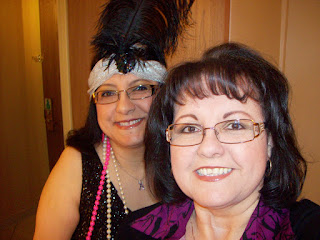 There were lots of people dressed up, I didn't get a chance to take pictures of everyone. I did get group pictures but because the reception hall was so dark the pictures didn't come out very well. 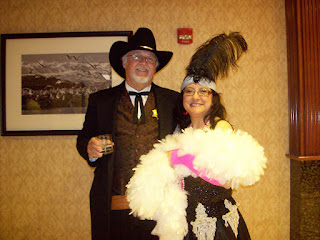 And here's Helen Kane with Benjamin Franklin...he left his kite and key behind because of the bad weather. Good thing because we didn't want lightening to strike him while we were partying! 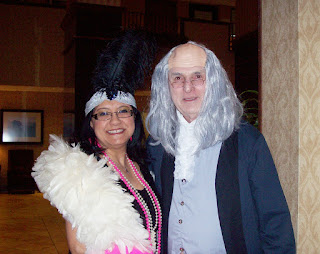 Helen Kane with ...yes, you guessed it!! Little Miss Shirley Temple! This young lady was adorable as Shirley Temple! She had tap shoes on and just tapped her way around the whole night! She was a lot of fun on the dance floor! 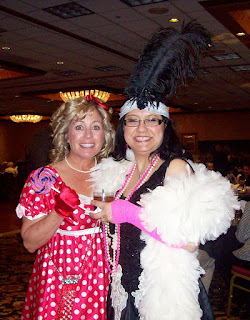 Helen Kane with Athena, Goddess of War. Let's hope she was there to defend California against more taxes! 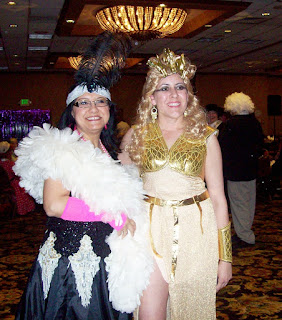 Helen Kane with Ben Franklin again and now they've also met up with Albert Einstein. A trio of great minds! 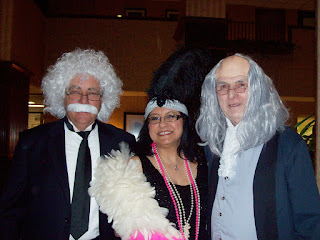 Can you guess this next one? She's the wife of one of the characters above. No clue? It's Josephine, wife of Wyatt Earp. 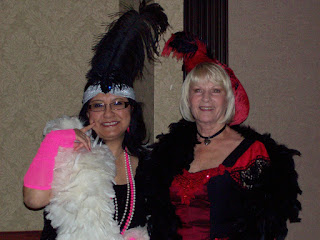 We had a couple of Julius Cesar's in the place, here is one of them with Helen Kane of course! Helen Kane was just everywhere "Boop-boop-a-dooping"! 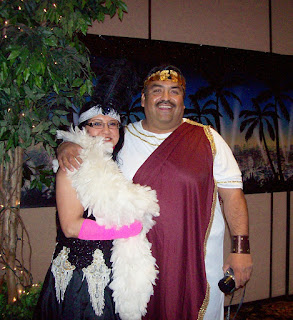 Here's another Julius. This one is also my sister's boss Tim, and of course Helen and Josephine. 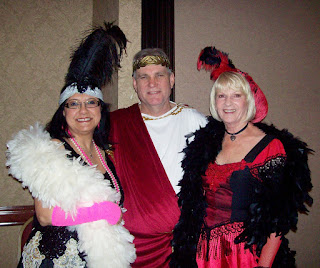 Helen Kane and Shirley Temple with Cleopatra! Isn't she regal and beautiful? I just loved her costume and her eye makeup. Oh...by the way, you can click on any of these photos to enlarge them and see more detail. 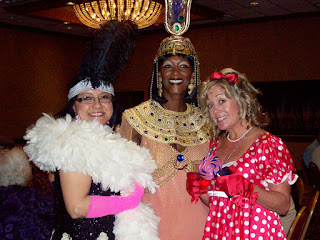 There was one very special couple that joined us that evening. They are members of the Cemetery Board for the cemetery my sister works for. This couple came as Dwight and Mamie Eisenhower. The costume that Dwight is wearing is the actual uniform that this man wore when he served his country! Can you believe it still fits him? He just added the four stars since he only made it to Liutenant and not General.  Mamie's costume is also original. The hat, glasses, gloves, jacket, pearls and brooch all either belonged to Beebs aka Mamie or to her mother! How sepcial is that? To save all these items!

Oh and one other special thing I want to mention is that this beautiful couple is celebrating their 60th Wedding Anniversary this year! 60 years....can you even imagine that? How blessed are they! Congratulations Dave and Bebes! 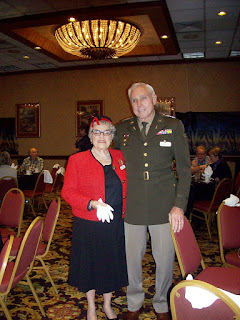 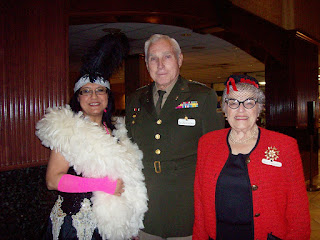 Here's General Eisenhower with Shirley Temple. What's the connection here? They are the winners of the Best Costume female and male! I think Lisa should have won for the females, but I may be a tad prejudiced. These two really did a wonderful job. Mamie was a runner-up! 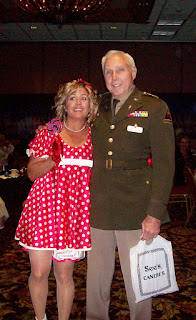 These next pictures are of the other two members of the board with Dwight and Mamie. Can you guess Superman? I'm pretty sure he is one of the most famous people in history (no one said they couldn't be fictional). And beautiful, sweet Florence Nightingale was there to nurse us if we needed and to provide the best bubble blowing in the room! 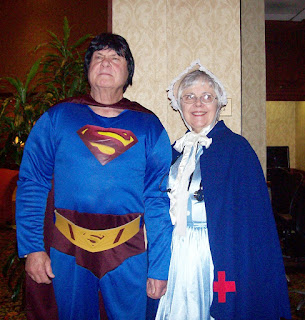 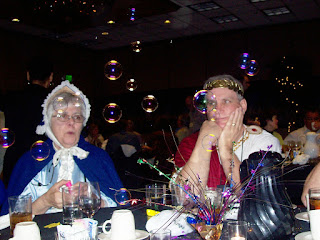 Here's the group shot. My sister Lisa as Helen Kane; her boss Tim as Julius Cesar; Dave and Beebs as Dwight and Mamie Eisenhower and Kathy (Mayor of the City of Shafter) and her husband Bill as Florence Nightingale and Superman. 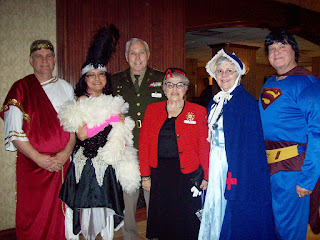 After the socializing, the contest and a fabulous buffet dinner we danced our butts off...literally! I've never had such a good time and seen such great dancers!

I had to add this one last picture because I played around with it and tried to make it look like the era of the Flappers. Isn't this a great shot? Thanks for taking me Lisa! I had the best time ever! 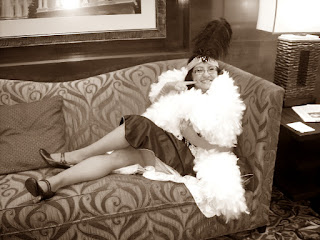