July 20th was my birthday and I celebrated in grand style and by that I mean with lots of food filled with lots of carbs. Egg McMuffins; Breve Latte’s from my co-workers. Lemon Meringue Pie again from my co-workers and lunch at Mexicali where I share Nachos with lots of sour cream, again with my co-workers…hmmm, maybe I don’t need Trixie, I just need different co-workers? (Just kidding Angelica and Edgar...you both are the best!)

Wait...I found an image I can share. Cheesy smile and all this is me at the office with the gifts from my co-workers/friends. 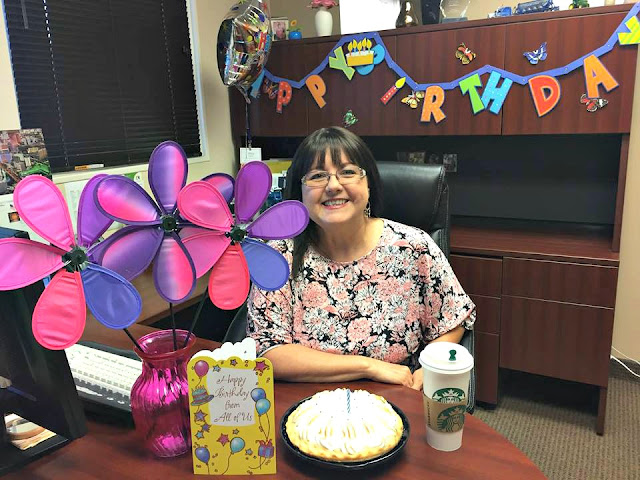 That wasn’t even the beginning of the end of it because I went out to dinner with my family and they took me to my favorite Mexican food place where I indulged in a delicious frosty Margarita and baskets of chips to dip into their fabulous bean dip and salsa! Then I ordered my traditional Chicken Taquitos served with rice, beans and guacamole alongside.

Once I had waddled myself on home, my son decided to buy toffee bars. But even without Trixie being there, I had the strength to limit myself to just one, but I know the box is in the freezer waiting for me...calling to me! Where is Trixie?


Well I'm putting the Kibosh on Trixie. Vacation over Trixie! I've decided that by my next birthday I'm going to lose 20 pounds. Shouldn't be too hard right? 20 pounds is not a lot. I'm hoping Trixie will jump on board and do her job and whip my brain into shape!

So here's to another year on this Earth and that I make it to next July 20th!