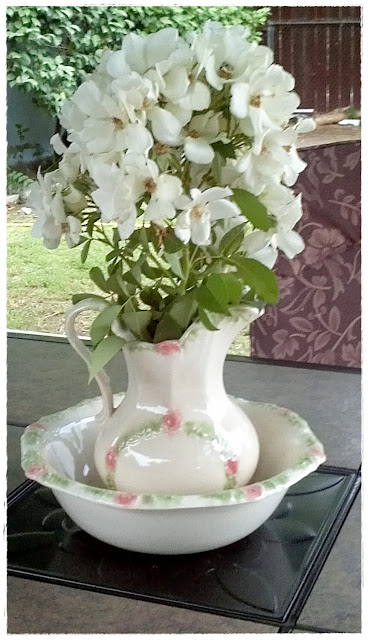 See these flowers? A stranger gave them to me today. No...actually, a stranger stole them for me today. Aren't they pretty?

See...here's what happened. Today after work, I was at home in my bedroom. My bedroom has a sliding glass door that faces a quiet street to the side of my house. I happened to see a small pickup truck go by. Mexican music was blasting out of this truck...very loud Mexican music. So I moved closer to the window, being nosey to see why the truck wasn't moving. 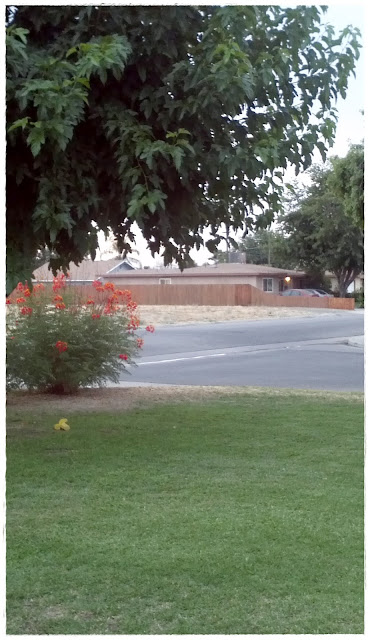 I see this man step out and walk over to my Arizona Plant, a plant that was planted by my mom and dad in the corner of the front yard. It only blooms when it's super hot as hell!

You can see the plant in this picture. (This is the view from my bedroom, don't you love it?) See the beautiful orange flowers? Well I guess this man just couldn't resist and I saw him walk over; after leaving his truck running in the middle of the street, and he took out his pocket knife and cut off one of the flowers. At that moment he looked up and saw me looking at him out of my bedroom window.

He looked at me kind of sheepishly and did a thumbs up. I took that to mean, "is it ok that I am stealing one of your beautiful Arizona flowers?"

Being totally generous of flowers that just bloom by the Grace of God, since I had nothing to do with it, I gave him the "thumbs up" right back so he would know, "Sure dude, it's all good...go ahead and steal one of my pretty little flowers!"

He then turned around and drove off and I went into the kitchen to tell my mom what had just happened.

About twenty minutes later, as I was looking out the kitchen window...I know, I know...I'm like one of those lookie-loo neighbors that never minds my own business!

But ok, I was looking out the kitchen window and I see the same little pickup truck pull up and park  in the street along side my house and I realize it is the same truck. So I tell my mom, "Uh oh...that guy that stole the Arizona Plant Flower is back!" The guy gets out of the truck and I see that he is holding some white flowers in his hand.

So he starts walking towards the front of my house and I head back into my bedroom where he is waiting outside the sliding glass door. Now I know why no one wanted this bedroom cause it's way too accessible to the street!

I open the screen door and he hands me the flowers and he says, "I felt bad that I stole your flower and so I stole these further on down the road to pay you back." Can you believe that? I take the flowers and tell him that I understand his stealing the Arizona Plant Flower because it's so beautiful and so unusual and they don't normally grow in California. He agreed and then said, "Well, the real reason I stole it is because yesterday I buried my wife and I'm heading to the cemetery and I saw your flowers and knew she would have loved them, so I had to take one".

Is your heart breaking yet? Mine did...

I told him how sorry I was and told him that I was sure his wife would love it and that he didn't have to repay me. He said he just felt bad because I was so nice to let him take one flower and he wanted to do something nice for me and now he was going to have to go steal flowers from somewhere else to repay the person he stole my flowers from!

I bid him good bye and put my pretty flowers in the pitcher you see in the picture above and sat there thinking about the whole thing and then said to my mom who had followed me outside, "Mom, if you had just buried your wife yesterday, would you be driving on the way to the cemetery with joyful Mexican music blaring in your car?"

Hmmmm, would you? I was brought up with the tradition that when someone dies you have a suitable period of mourning or "luto" as we say in spanish. You don't watch TV or listen to music or go to dances or parties. But I know that now a days, we don't mourn but we celebrate life...so who knows.

What say you? Does this seem odd or normal to you? Either way I had something interesting to blog about and I got to show you all my Arizona Plant and also I can brag that the beautiful pitcher and bowl that the flowers are in was made by my mom in a ceramics class she took eons ago. Isn't it pretty? I love it!